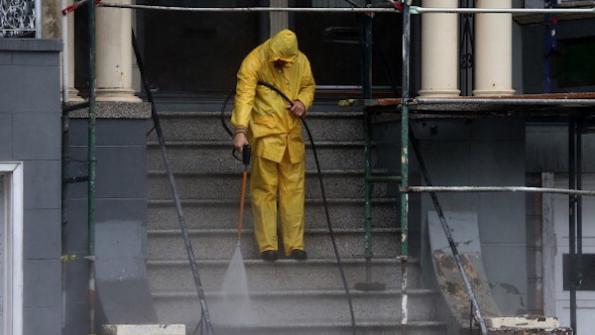 Between Jan. 1 and Aug. 13, 14,597 calls were placed to San Francisco’s 311 service to report feces, the San Francisco Chronicle reports. It totals 2,427 more feces-related calls than during the same period last year.

“I will say there is more feces on the sidewalks than I’ve ever seen growing up here,” San Francisco Mayor London Breed told NBC Bay Area.  “That is a huge problem and we are not just talking about from dogs — we’re talking about from humans.”

Conversations between Breed and San Francisco Public Works Director Mohammed Nuru led to the creation of the so-called “poop patrol,” according to San Francisco Bay Area TV station KPIX. The new team — five workers and one supervisor — will actively look for feces to clean up in hot spots around the city. The team will have a direct supervisor, and no end date has been set yet for the pilot program.

“We have the data that shows where most of the complaints are for poop clean up,” Breed told San Francisco FOX affiliate KTVU. “So, the goal is to make sure we have a dedicated team and they are focusing on those particular areas where we know it’s most problematic.”

According to Nuru, San Francisco will spend about $750,000 to search for and clean up feces, KTVU reports.

The poop patrol will bolster the city’s Pit Stop program, which has placed 22 staffed public toilets around the city as of Aug. 14, the Chronicle and KTVU report.

Those funds will be allocated in addition to $1.05 million that was committed towards building five Pit Stop toilets in the city and expanding hours at five other Pit Stops, the Chronicle reports. As of Aug. 14, 22 public, staffed Pit Stop toilets existed around the city, according to the Chronicle and KTVU.

With most being open only until the late afternoon or early evening, homeless people encounter issues when trying to relieve themselves at night, according to the Chronicle.

“We’re trying to be proactive,” Nuru told the Chronicle, of the new patrol. “We’re actually out there looking for it.”