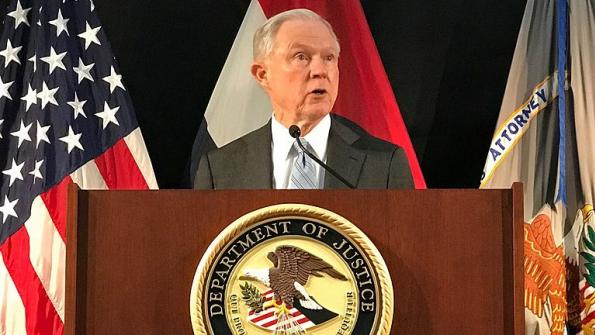 Not all local governments in California agree with the state’s new immigration policies.

Not all local governments in California agree with the state’s new immigration policies.

"We have an obligation to safeguard our community and we will use every tool available to help hold criminals accountable," Orange County Undersheriff Don Barnes said, per the Los Angeles Times. "Our inability to relinquish these individuals to the custody of ICE causes them to be returned to the communities which they prey upon."

Passed and signed into law last year, California SB 54 prohibits state and local police from telling federal officials in many instances when immigrants in their custody who could be deported are about to be released, the Times reports.

"These state laws are preempted by federal law," Orange County Supervisor Shawn Nelson said, per the Times. "Our officers actually face penalties under state law if they so much as talk to federal agents for the wrong thing. That's just unacceptable and it's contrary to federal law."

With the vote, Orange County joins other city and county officials within California that publicly oppose their state’s sanctuary laws. The mayor and a council member of Huntington Beach, Calif., (which lies inside Orange County) are seeking relief from the state’s illegal immigrant protecting policies, arguing that they violate federal law and threaten public safety, according to the Times.

"In order for the city to maintain our superior record of public safety, we have been exploring options to ensure your safety and maintain local control, while at the same time, fulfill our oath of upholding the Constitution," Huntington Beach Mayor Mike Posey said, per the Times.

Another Orange County city, Los Alamitos, voted on March 19 to exempt itself from California’s policies on cooperating with federal immigration officials, according to the Orange County Register. The council also voted to ask the city attorney to write an amicus curiae brief — filed by a non-litigant on behalf of a litigation party to further educate the court — for the federal case against California.

Officials in Buena Park, Calif., and Aliso Viejo, Calif., are considering the adoption of similar measures within their own cities and intend on starting discussions with other officials within their jurisdictions, the Register reports. “I think [Los Alamitos officials] were spot-on; that we take the oath of office to uphold the Constitution of the United States,” Aliso Viejo Mayor Dave Harrington told the Register.

California Senator Kevin de Leon, who authored SB 54, has warned these cities about their decisions, the Times reports.

"Pushing a racist and anti-immigrant agenda devoid of facts or supporting legal analysis is a pretty sad use of taxpayer resources, especially when it could result in crippling legal costs for cities that rush to join this dead-end effort," California Sen. Kevin de León, who wrote SB54, said in a written statement per the Times.