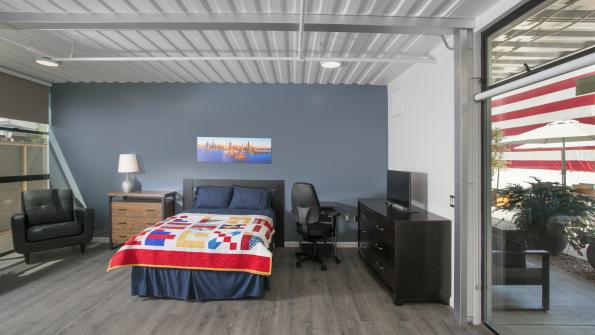 Communities across the country are working to help veterans address issues of mental health and homelessness with creativity and compassion.

As the Fourth of July quickly approaches, most Americans’ thoughts are drawn to our nation’s fighting men and women of the present and past. Flags are waved, patriotism swells and town squares are decorated in red, white and blue. While the pageantry certainly is exciting, the unfortunate reality is that many of our country’s veterans have not been well cared for since returning home. Many suffer from post-traumatic stress disorder (PTSD), depression and substance-abuse-related issues in solitude.

However, there are communities across the county that are making the welfare of their veteran populations a priority. Through non-conventional means, collaboration and outside-the-box problem-solving, these three localities are helping better serve our vulnerable heroes.

Several communities have utilized what’s called a “housing first” model to deal with homeless populations. The idea is simple – provide residency first, then build on that stability with whatever other individual supportive programs might be necessary. The main issues with the model though, is a lack of affordable housing in cities and the time it takes to build new residences for at-risk populations. 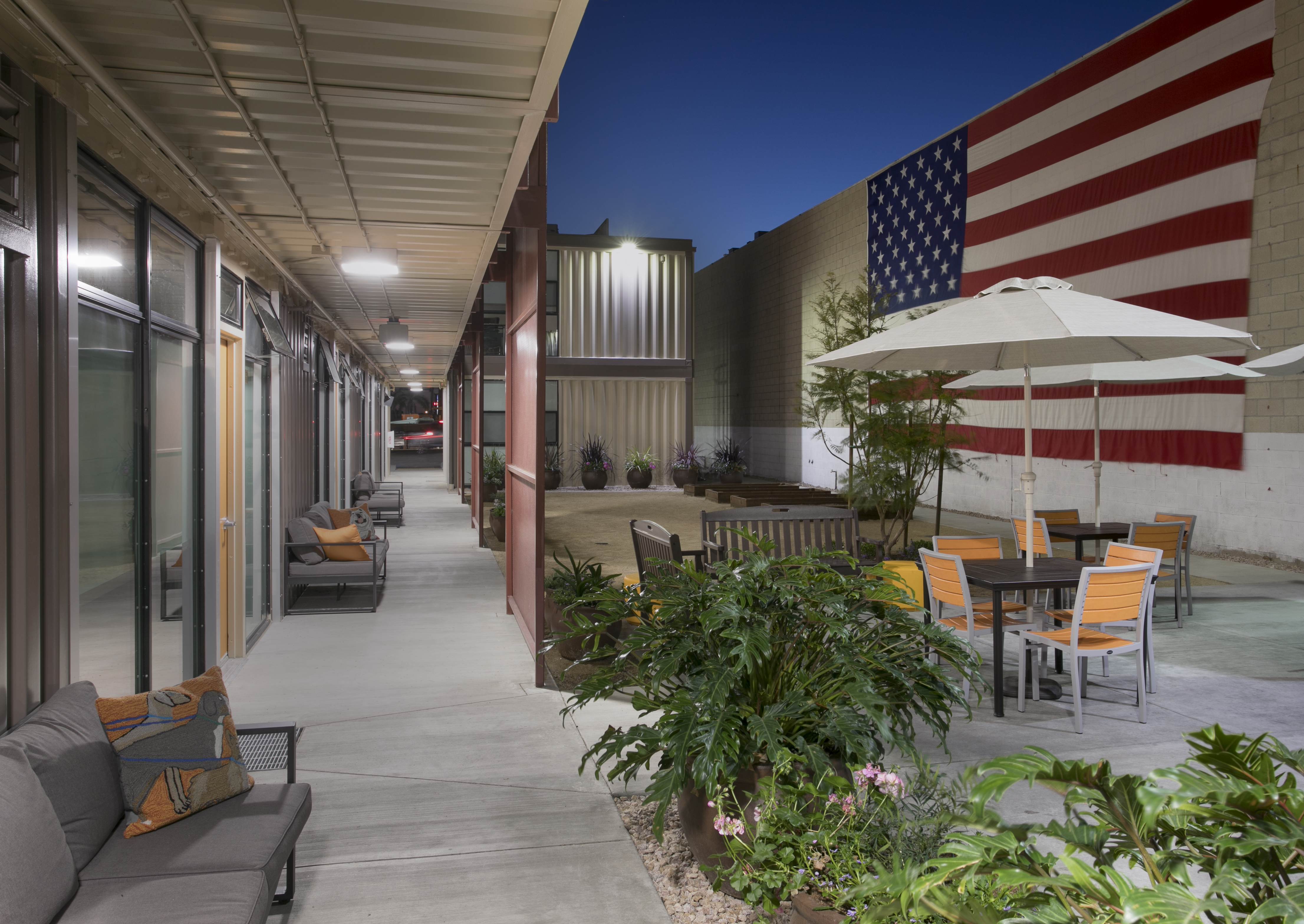 However, one organization thinks it has a solution. American Family Housing (AFH), a California-based non-profit that provides housing and other services to support homeless and low income individuals, has partnered with GrowthPoint Structures, which is using empty shipping containers to build classrooms. Donna Gallup, AFH’s chief executive says GrowthPoint’s concept can be put to work to help solve the issue of homelessness – both veteran and civilian.

Putting the theory to the test, this month AFH broke ground on the Potter’s Lane project, a two-story, 16-unit apartment complex for homeless veterans. “[The project] is the first permanent supportive housing project built with shipping containers in the country,” Gallup says. And while the materials themselves are unique, the speed at which the containers allowed the project to be completed was impressive. From the time AFH got its building permits to when it was issued its certificate of occupancy was six months. “In terms of addressing a critical need… there isn’t any other project that can be done that quickly,” Gallup says.

The units themselves are far from austere. Each studio apartment is 480 square feet and built using three containers. They feature floor-to-ceiling windows, full bathrooms, full kitchens, heating and air-conditioning,

The project site is in unincorporated Orange County, Calif., and the structures themselves were approved at the state level. However, the county championed the project from the beginning and helped get all stakeholders to back the development. “At first everyone was very cautious – government itself is not a risk-taking entity,” Gallup says. “So, having that kind of political support was very valuable in moving the project along in a timely manner.”

“I’ve spoken to jurisdictions from Florida to Alaska, from Long Island to Oregon,” says Gallup. “Everyone is very interested in trying to replicate the project in their community. Many jurisdictions are trying to address the problem of homelessness, and this is a way they can do it very quickly.”

But housing is only one piece of the puzzle. Many vets require supportive services and need help navigating the often-confusing waters of the benefits they are owed. That’s why Marion County, Fla., sought to consolidate all of this information under one roof.

Marion County is home to 45,000 veterans, with 650,000 more living in an 80-mile radius. All of these individuals are entitled to various benefits from the government and their communities, and many more still need support. “[The county] has always cared about veterans,” says County Commissioner Carl Zalak III. “They can come home and feel like they’re family here.”

However, Zalak says the county wanted to better serve veterans. The community provides numerous programs and there are several local non-profits that offer services, but they were not consolidated. Zalak says the county thought they could do a better job of serving veterans by working together.

That idea lead to the creation of the Marion County Veterans Resource Center. Built out of a vacant bowling alley, the center is now full of representatives from both the county side and the nonprofit side. Essentially, the center serves as a one-stop-shop for veterans to gain access to whatever services they might need. “This is empowering veterans for their next step in life,” Zalak says. “We’re helping them transfer the skills they learned in the armed forces over to the private sector.”

The services offered at the center run the gamut from banking and financing to job-seeking and interviewing skills to technological proficiencies and computer classes, Zalak says. There are several outreach events planned to help veterans get more connected in the community. “We’re really trying to bridge the gap,” he says. “The great part about it is that the services are actually getting to the veterans,” Zalak says. “That’s huge.”

There are a multitude of services out there for veterans, but the ones that make the most impact are often those that are the most compassionate. Many veterans come home with injuries from battle – some external and some internal – and need the help of their communities to feel secure again.

New Jersey State Senator James Beach had a veteran constituent walk into his office with his service dog. Interested, the senator asked where the animal was from. The veteran answered he had to travel to Ohio to receive the animal. There was no program in his home state that provided the support the veteran needed. 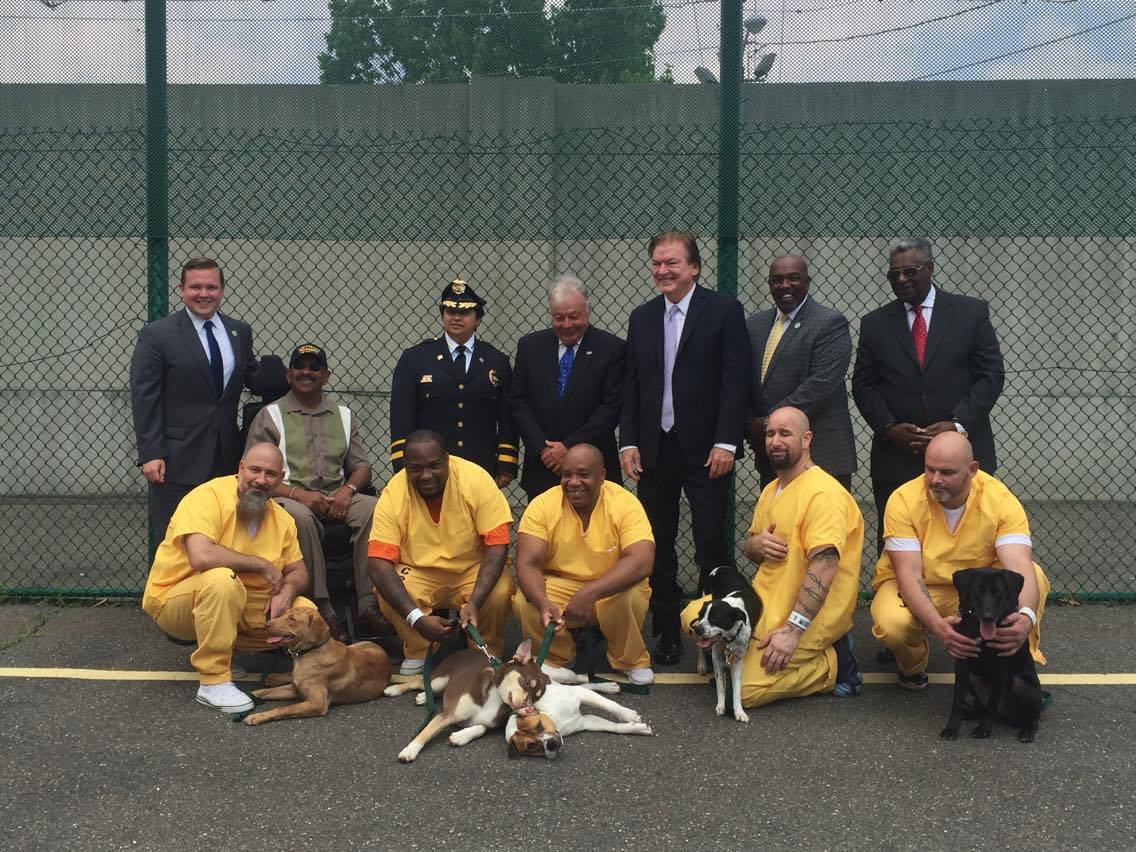 The senator brought the problem to Camden County Freeholders William Moen – liaison to the department of veteran’s affairs and Jonathan Young – liaison to the department of corrections, who, after some brainstorming and research, came up with a program that would benefit multiple parties. They would have local inmates train rescue dogs to be matched with veterans suffering from stress-related mental conditions.

Non-violent offenders are selected by corrections officers to be part of the program, Young says. At the same time One Love Animal Rescue – a local shelter – visits facilities in search of dogs that would be suitable emotional support animals. The animals and inmates are then put through a 12-week training course supervised by trainers from One Love.

The dogs live with the inmates, who are taught to train the animals to show compassion for their owner, says Young. And while the animals are ultimately going to help veterans deal with depression and PTSD-related issues, they also help inmates manage their own mental issues and develop valuable job skills. “It’s a really remarkable program,” says Young. The program just graduated its first two dogs this month, with three more in the program.

“There are 30,000 veterans who live in Camden County,” Moen says, adding that an estimated 20 percent of returning veterans will suffer from PTSD at some point. “This is a program we expect will be a foundation for other governments at the local and county level to consider replicating in the future.”