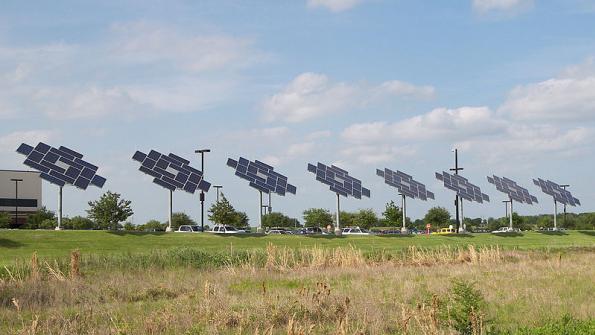 Municipalities obtain and use solar through different means

Solar energy continues to be a burgeoning energy source that cities are increasingly tapping into. However, the exact ways such cities acquire and use the solar energy differs across municipalities.

Solar energy continues to be a burgeoning energy source that cities are increasingly tapping into. However, the exact ways such cities acquire and use the solar energy differs across municipalities.

Houston is the largest municipal buyer of renewable energy in the county, and it plans to further augment its renewable energy portfolio, the Houston Chronicle reports. In 2015, Houston enacted a 20-year, $80 million agreement to buy 30 megawatts of power per year from the Solaria Holman solar plant in Texas. In February, the city increased the deal to include purchases of the plant’s entire yield of 50 megawatts, which it will spend a maximum of $125 million over 20 years to procure,

The upgrade will cover 10.5 percent of the city’s annual electricity requirements, according to the Chronicle. The solar power will start being accessible in April.

“This is a 20-year deal, a locked-in, guaranteed rate,” Houston Mayor Sylvester Turner told the Chronicle. “Green energy is better on so many different levels, and I think it’s important for the city to diversify its energy supply.”

Thanks to a deal with a New York solar company, Troy, N.Y., will soon start saving lots of money on its energy costs through solar energy, the Troy Record reports. Monolith Solar of Rensselaer is installing solar panels in several locations and several city facilities in the area as part of a remote net metering project.

Monolith will sell the energy collected from these panels back to the city at a discounted rate, according to the Record. The 2.1 megawatts of energy will cover about 40 percent of the city’s facilities’ electricity usage. As Monolith is paying for the $4 million installation of the panels. he project is aimed to save the city $100,000 in its first year of operation and $200,000 over the next 20 years.

“It’s important for [the city] to be use more sustainable energy, to reduce our carbon footprint,” Troy Mayor Patrick Madden told the Record. “The savings are important, too.”

Kearney, Neb. just signed up for an $11 million solar panel project, the Kearney Hub reports. The solar panel array will be Nebraska’s largest, and it will generate 5 percent of Kearney’s peak demand on sunny days. In addition to bringing renewable energy access to the city, the project will also create local jobs and give citizens the ability to buy stock in the local solar energy.