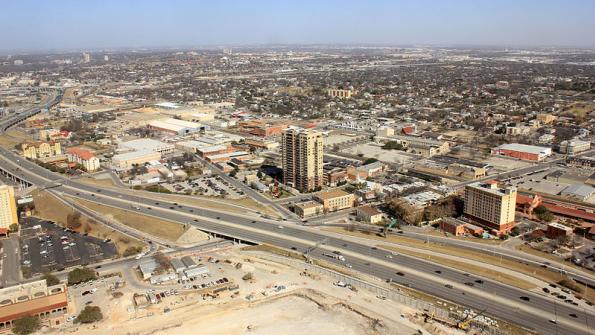 If Converse, Texas, agrees to an annexation agreement that San Antonio has proposed, Converse could triple in size-- all to bring municipal services to a patch of unincorporated Bexar County.

If Converse, Texas, agrees to an annexation agreement that neighboring San Antonio has proposed, Converse could triple in size – all to bring municipal services to a patch of unincorporated Bexar County.

In the inter-local agreement (ILA), Converse would annex a 12-square-mile piece of unincorporated land that lies between it and San Antonio, the San Antonio Express-News reports. The unincorporated area consists of the low-income Camelot II and The Glen subdivisions, which contain about 40,000 people, according to the Rivard Report.

The ILA arose out of San Antonio considering an annexation of the land in 2016, according to the Rivard Report. However, the city calculated that the cost of providing urban services to the area for 20 years would lead to a deficit of $140 million. The San Antonio City Council summarily rejected the proposal to annex the area.

San Antonio later proposed this ILA with Converse, which would carry the annexation out until 2033, according to the Express-News. If approved, Converse will grow from 7 square miles and 22,000 residents to 22.7 square miles and over 68,000 residents over about 20 years. Converse would also gain about $8.6 million by the end of the 20 year period, as well as 57 firefighters and EMS positions and 85 police officers.

“Both city staffs have worked together for many months to formulate this final (agreement) between the City of Converse and the City of San Antonio. I believe it to be a sound agreement” Converse Mayor Al Suarez told San Antonio radio station KTSA.

The annexation isn't universally supported. Converse Councilwoman Deborah James, believes the deal has been reached too fast, according to the Express-News. A group called Homeowners Against Annexation has also spoken out against the proposed measure, San Antonio TV station KSAT reports. Instead, the groups supports a senate bill and a house bill that would let them vote on if the people in the area wanted to be a part of the city.

San Antonio approved the ILA on March 9, the Express-News reports. Converse City Council is schedule to vote on the measure on March 21.