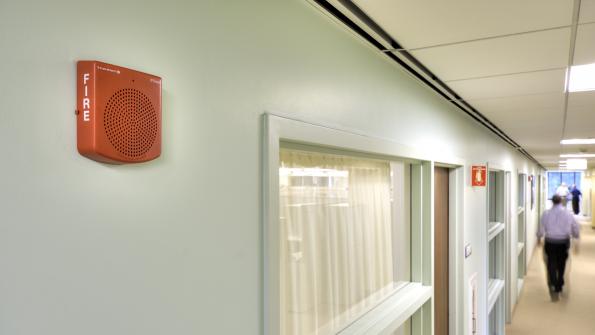 MSSU’s system enables emergency messages to be transmitted in campus buildings through fire alarm speaker devices. The addressable emergency notification systems enable staff to identify precise locations of activated devices; this helps emergency personnel to respond more quickly. With each array possessing 1,200-1,600 watts of power, emergency messages can be heard throughout the campus and the surrounding city, up to two miles away. The messaging units provide additional notification away from the campus.

MSSU’s emergency preparedness was put to the test in May 2011, as an EF-5-category tornado packing 200-mile-per-hour winds bore down on Joplin, Mo. During the crisis, the value and importance of MSSU’s investment in its fire alarm and emergency communications system became clear.

Fortunately for the university, the MSSU campus was not impacted by the tornado that devastated much of Joplin, Mo. But in the eyes of university officials, the emergency communications system was invaluable in warning people across campus to find shelter in preparation for the approaching twister.

“Our severe weather emergency system reflects years of commitment to safety for our on- and off-campus communities,” says Bob Harrington, director of MSSU’s physical plant. “We are prepared for emergency events, thanks to our technology and integration with the city of Joplin, and are proud to serve as a resource for our local community.”

The fire and communications solution at MSSU plays a key role in the protection of both students and the nearby public. The university’s campus has a recently completed 11,000-square-foot Federal Emergency Management Agency shelter that offers protection to over 2,000 people in both the university and its neighboring area. Furthermore, the university serves as an official American Red Cross shelter site. The Red Cross has incorporated some of the university’s training policies and procedures in its program.