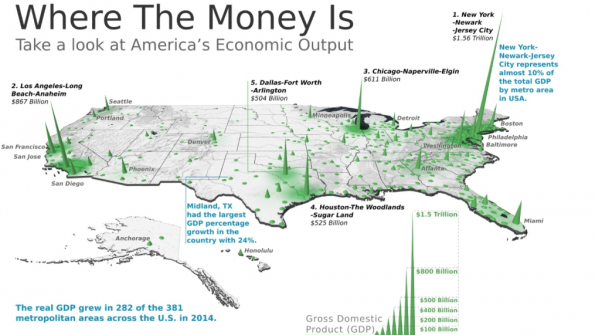 Recently released federal data shows the cities and states with the greatest economic output in the country.

The New York metro area makes up about 10 percent of the U.S.’s total GDP, and, between 2013 and 2014, saw a 2.4 percent increase in economic growth, according to statistics released earlier this month from the U.S. Department of Commerce and its Bureau of Economic Analysis (BEA). Los Angeles, with $866 billion in GDP, Chicago, with $610 billion GDP, Houston, with $525 billion GDP, and, another Texas metropolis, Dallas, with $504 billion in GDP, round out the top five metro areas for economic output based on GDP in 2014, according to the statistics.

GDP grew in 282 of the 381 metropolitan areas across the U.S. in 2014, and, though, Midland, Texas, did not make the top five metro area list, the area did lead the country in GDP growth with a 24 percent spike between 2013 and 2014. Researchers at HowMuch.Net, a financial website, analyzed the BEA data and built a 3D map displaying which areas of the country have the most economic growth and output. Its analysis found that the top 20 metropolitan areas represent more than 50 percent of the country’s GDP.  In comparing the cities and states with greatest economic output, population size of the municipalities and states greatly contributed, according to HowMuch.net.

As for state economic output, California, Texas, New York, Florida and Illinois lead the nation and, combined, make up 40 percent of the U.S.'s GDP.