New Orleans’ health initiative asks bands to turn it down

Residents in New Orleans, a city beloved for its year-round sonance of street brass bands, have decided that the big band should quiet down.

Residents in New Orleans, a city beloved for its year-round sonance of street brass bands, have decided that its time the city should quiet down.

For some, the signature New Orleans bands that line the French Quarter have created a cacophony, leading to a citywide health initiative, called Sound Check, to address resident complaints of excessive noise, according to Reuters. In the city’s popular French Quarter and Fauborg Marigny areas, health inspectors will monitor decibel levels. Gathering that information will help the city inform musicians and club owners about the negative health effects of extreme noise levels. 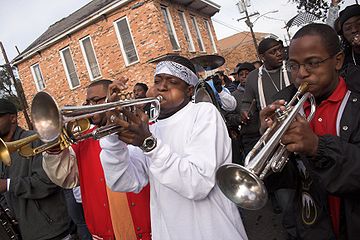 The New Orleans City Council attempted to revamp a sound ordinance in the city, but the lack of support led to a health education initiative instead, according to The Advocate.

“We’re saying (to businesses): ‘Here’s some info, here’s some ways you can help your consumers and customers be safe and have a good time,’” Charlotte Parent, the city’s health director, told the newspaper.

The idea of limiting some of the popular local bands and venues’ creative freedom has brought ire from musicians and venue owners, but the idea of a realistic health initiative could work, Ethan Ellestad, spokesman for a coalition of venue owners and artists, told Reuters.

“If you make 80 decibels the limit in the French Quarter, you’re never going to realistically have a brass band that can perform,” he said.

Lorelei Cropley, a public health professor and proponent of Sound Check, said she has suffered through years of elevated noise due to the ubiquitous street music culture in her neighborhood. She hopes the awareness program will give her ears a break.

“New Orleans is a city where the buildings are very close together, and in the Jazz Age, (music venues) didn’t have the amplification they have today,” she said.

The website for Sound Check encourages musicians to wear hearing protection and monitor their volumes, but there will be no enforcement associated with the program for now.