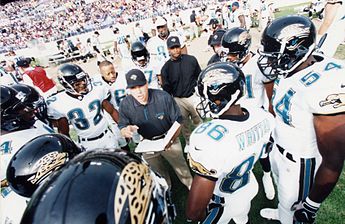 Are you ready for some football?

Perhaps not, if you're one of the faithful fans of the Cleveland Browns, since the Browns have not won an NFL championship in more than 50 years.

Cleveland may be undergoing a championship drought, but the city's lack of championships cannot compare to one southern city's dubious distinction as a sports city with no championships in its major league sports -football and basketball.

American City & County compared the rankings from WalletHub's 2015 Best & Worst Cities for Sports Fans and thesportster.com's 20 Worst Major Sports Cities in North America. The list was whittled down to the top 10 worst cities, only including those with NFL teams, and adjusting the ranking to reflect the cities with the worst NFL record.

Residents and fans of major league and college level sports see the impact of their teams, considering  the North American sports industry takes in upwards of $60 billion in ticket and merchandise sales, sponsorship fees and media rights each year, according to a PricewaterhouseCoopers' Sports Outlook study. City officials are responding by updating football, baseball, hockey and soccer facilities to accommodate residents and tourists hoping to watch a winning game.

Take a look at what cities have a long season ahead of them this fall.