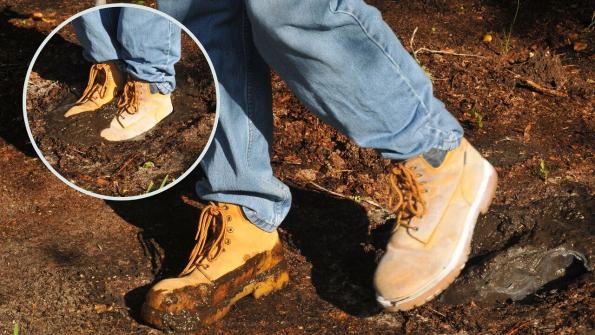 Urine from both dogs and humans is damaging the concrete bases of streetlights. According to web news reports, corrosion from urine contributed to the collapse of a 3-story light pole in San Francisco recently. The pole fell on a moving car, missing the driver by inches. No injuries were reported. An oversized banner, hanging from the light fixture, may have contributed to the pole collapse. 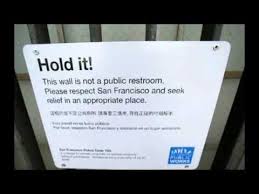 Aging and damaged lamp posts and light poles are a concern to the San Francisco’s Public Utilities Commission. Agency crews are now visually inspecting all 25,000 light poles to determine which ones need replacing. The agency has requested a tenfold increase in its budget for streetlight maintenance to cover pole replacements.

The San Francisco Public Works Department is working to sanitize urine-soaked walls and alleyways outside a Mission District transit station and other locations. The department has posted signs (photo at right) above the walls that urge people to hold it until they get to a public restroom.

Mohammed Nuru, director of the department, is waging a public campaign against public urination. “If you have to go, go in the right place” is one of the campaign’s slogans.

No question about it, there is a shortage of public restrooms. Many restaurant and cafes in the Golden Gate city have signs warning: “No Public Toilets.” During the past year, Nuru’s Public Works Department has brought well-maintained solar-powered portable toilets with sinks, complete with bathroom attendants, to sections of the city’s Tenderloin District during designated hours.

The department has covered nine public walls in targeted areas with a repellant paint that deflects the urine spray back on the offender. Jacksonville, Fla.-based UltraTech International manufactures the Ultra-Ever Dry paint. Applying the paint is cheaper than the $80 an hour the city pays to steam-clean alleyways, walls and sidewalks.

Nuru’s department tried out the paint after learning how the product is used in Germany, on the walls near Hamburg’s St. Pauli entertainment and party district. There, walls have been painted with the Ultra-Ever Dry material to encourage late-night beer drinkers to find a bathroom rather than an alleyway.

Ultra-Ever Dry is versatile, says Mario Cruz, UltraTech International’s marketing manager. “The product has also been used to prevent snow and ice from building up on walkways and roofs/overhangs where it could present a danger to passersby,” Cruz tells GPN. His firm has also successfully tested the product on traffic and street signs which get very dirty over time and cannot be easily read unless they are cleaned. Cruz says the Ultra-Ever Dry paint works to repel urine and other materials, so public areas stay clean and dry.

In the video, see how Ultra-Ever Dry, a superhydrophobic coating — repels almost any liquid.