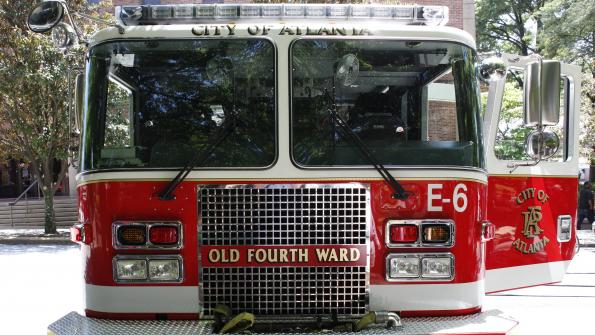 A Festival of Fire

The Old Fourth Ward neighborhood in Atlanta banded together to hold a street festival based on The Great Atlanta Fire of 1917.

The Great Atlanta Fire of 1917 decimated the Old Fourth Ward neighborhood when it happened. Nearly a century later, business owners in the neighborhood recently held a fire-themed festival on Saturday, May 2nd to commemorate the event. Why would they do such a thing? To celebrate the history of the neighborhood with the surrounding community.

Matt Ruppert, owner of Noni’s, which is a restaurant and bar in the Old Fourth Ward, is also the Event Chairman for the neighborhood’s business association. Ruppert established Noni’s in the neighborhood on Edgewood Avenue at a time when the street was less business-friendly. He did so out of necessity as he says no one else in other areas of the city would give him a chance. Though, he added, “I fell in love with the urban-ness of it, the charm of the neighborhood, which was MLK’s neighborhood, in a historic part of town. Edgewood Avenue is one of Atlanta’s oldest streets. It’s connected downtown to Inman Park [one of Atlanta’s more prominent residential neighborhoods] for years and has always served as a functional and important thoroughfare.”

Once Ruppert’s restaurant had been open for a sufficient period of time, the idea of a street festival occurred to him. He partnered with the owner of Corner Tavern, Mike Rabb, and the co-founder of The Sound Table, Darren Carr to form a neighborhood business association in March of 2012. Both those businesses are also located on Edgewood. “We brought in Jennifer Ohme, who is our director to this day. We realized we needed the proper amount of organization, clout and money to pool our resources together to form a festival,” he said.

After the business association successfully established itself as a non-profit over the course of six months, its members turned their attention back to the idea of a festival. The neighborhood’s first festival, Crescendo, was based around music and took place in 2013. “It was very underwhelming as far as a festival goes. We didn’t have a location. It was not on the street. It was distributed across the restaurants and bars. After that was over, we decided it was time to do a street festival,” Ruppert said.

Ohme previously managed the Little Five Points Business Association in Atlanta. She became interested in getting involved in the Old Fourth Ward, which lies between Little Five Points and downtown Atlanta, as small businesses began to successfully emerge in the neighborhood. “Since I’ve been doing development work, I’ve always looked at how one community connects to one another. I knew that if downtown [Atlanta] was ever going to be vibrant and healthy that the connecting neighborhoods would have to be vibrant and healthy and have something to offer,” she said.

How did the idea for a festival themed around fire – the very thing that had destroyed the neighborhood nearly a hundred years ago – come about then? Ruppert said, “We wanted it to be very unique. Atlanta already has a ton of festivals…we wanted [ours] to be new and inventive and also historical. We think we achieved that with Fire in the Fourth because we’re paying homage to one of Atlanta’s most catastrophic and important days – the Great Atlanta Fire of 1917.”

The event, which was free and for all ages, was billed as a curated experience and featured a fireman’s muster competition, live music, aerial performances and fire-swallowing among other attractions. Ohme also mentioned the association’s history presentation as one of the festival’s highlights. “The programming focused on the fire of 1917 and its impact on the neighborhood, which was unique. We had a packed house of thirty people sitting down for a half-hour to 45 minutes to learn.”

So what enabled the neighborhood to do a street fair after a festival that didn’t even have a location? “That definitely happened because of the Atlanta BeltLine and the streetcar,” Ohme said. The beltline, which is a scenic paved path for pedestrians and cyclists, cuts through multiple Atlanta neighborhoods while the streetcar’s route goes through the heart of downtown Atlanta cutting through the Old Fourth Ward as part of its journey. Both are recent developments.

“We’re able to bring in more businesses that will not only serve residents but are also attractive to all the tourism dollars becoming available because of these infrastructure developments,” Ohme said. Ruppert added that the businesses on Edgewood so far are unique because they want to see each other succeed rather than viewing one another as competitors. “The future of the Old Fourth Ward is a continuation of that where we’re able to manifest…better, more awesome businesses side by side.”

The profits from the festival’s sponsors and sales of beer will be used to provide directory maps of the neighborhood, increased security and even necessities as simple as public trash cans. The trash cans, which the city is not able to provide to all areas, cost $1,000 a piece according to Ohme. Ruppert added that he hopes the festival enables people’s creativity, energy and passion to continue thriving for the neighborhood and its businesses. Ohme acknowledged that the event’s success was because of those very people – residents, visitors and business owners – who showed up to help and give back to the community. The business association intends to make the festival an annual event.