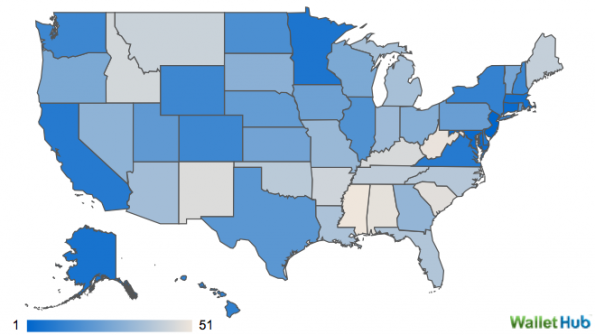 The wealthiest states and the top 1 percent

The top 10 wealthiest states include The District of Columbia, New Jersey and Connecticut.

The wealth gap in America is vast, and it’s growing.

According to Oxfam, the wealthiest one percent captured 95 percent of post-financial crisis growth since 2009. Within the same period, overall income levels for the bottom 90 percent of Americans declined.

The middle class is also suffering. The Center for American Progress reports incomes for the middle class have either been stagnant or declining since 1999. In 2013, the average middle-class household was earning $4,500 less than it did pre-recession.

But some sections of the population are seeing growth. The Boston Consulting Group found the U.S. had the highest concentration of millionaire households – 7.1 million – in 2013. If private wealth continues to grow at the rate it has been, it will reach an estimated $59.1 trillion by the end of 2018.

So in which states do the wealthiest Americans reside? WalletHub, a personal finance website, ranked the 50 states and the District of Columbia based on income, GDP and federal taxes paid per capita to understand the richest and poorest states.

The top 10, starting with the wealthiest, according to WalletHub, are:

The highest percentage of households earning more than $200,000 a year are the District of Columbia, New Jersey, Connecticut, Maryland and Massachusetts. The lowest percentage of these households are found in Idaho, Arkansas, West Virginia and Mississippi.