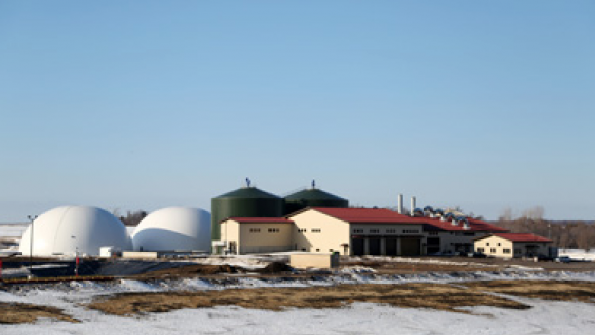 Food waste is a major problem in the U.S., but biomass facilities and waste reduction policies are helping state and local governments cut down pollution created by organic refuse.

Americans throw away more food than any other type of waste (approximately 35 million tons in 2012), but several states and municipalities are working to combat the problem through policy changes and technological advancements.

In 1980, food waste made up less than 10 percent of America’s total refuse steam; now it’s makes up nearly 20 percent, according to The Washington Post. A 2012 paper released by the Natural Resources Defense Council estimated as much as 40 percent of American food ends up in the trash.

Wasting resources is an obvious issue here, but a less apparent problem is the threat such waste poses to the environment. Food waste in landfills produces large quantities of methane, a particularly harmful greenhouse gas. Landfills are the single largest producer of methane in the U.S., according to The Washington Post.

Some states and municipalities are working to solve the problem through technological advancements and policy shifts. Instead of letting organic matter rot in landfills, Le Sueur County, Minn., recently opened a $45 million bioenergy plant that converts organic waste to energy according to Midwest Energy News.

The digester works by using specialized bacteria to “eat” organic waste, and collecting the byproducts of these biological processes to convert to energy. The Le Sueur plant is capable of producing 8 megawatts of electricity, and is one of the largest facilities of its kind in the country, Midwest Energy News reports. The plant is currently running at 60 percent capacity.

“It’s a biological process, it’s not like you can flip the switch,” Kelsey Dillon, the vice president of bioenergy for Avant Energy, which manages the plant, told Midwest Energy News. “There’s definitely an art to getting the [bacteria] acclimated and getting them tuned up to digest this material at higher and higher strengths, if you will, we’re still in that ramp-up period, but it’s going well.”

Officials in Massachusetts are also taking the problem seriously, The Guardian reports. Starting Oct. 1, approximately 1,700 of the state’s biggest food waste generators such as hospitals, colleges, supermarkets, hotels, nursing homes and prisons, must divert organic food waste away from landfills, due to the state’s recently passed aggressive commercial food-waste ban.

Organic waste makes up about 25 percent of Massachusetts’ waste stream, The Guardian reports. Some of the material is shipped out of state, but most ends up in local landfills.

“It’s expensive to get rid of; there’s a whole suite of environmental problems associated with it, and we’re leaving economic opportunity on the table,” David Cash, commissioner of the Department of Environmental Protection, which will regulate the new law, told The Guardian. “That banana peel can be turned into compost. It can be turned into energy. Not-quite-expired food can be directed to food pantries or used to feed agricultural animals.”

But diverting the waste will require the cooperation or local businesses as well as additional infrastructure. The Guardian reports the state will provide technical assistance and $1 million in grants to help develop waste reduction programs as well as $3 million in low-interest loans to create local composting programs and anaerobic digestion facilities.

"We’re hoping this will spawn all kinds of economic innovation that we can’t even identify yet,” Cash told The Guardian.