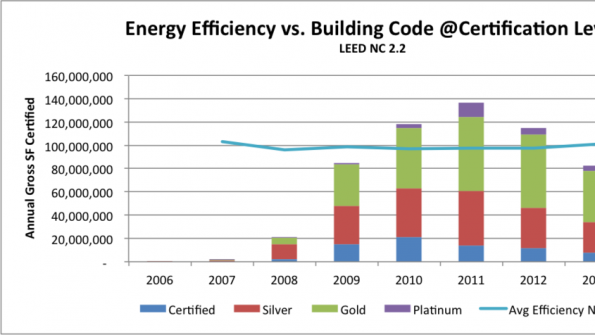 LEED efficiency has increased over time

By analyzing 10 years of LEED data, the U.S. Green Building Council, in association with Ember Strategies, found that energy efficiency of LEED-certified buildings has increased through the years.

The U.S. Green Building Council in association with Ember Strategies recently studied 10 years of LEED (Leadership in Energy and Environmental Design) data to understand how energy efficiency has evolved.

A building’s potential LEED certification is determined by how much more efficient the design is than what would be required by the most stringent energy code. The difference between the building’s efficiency and the code requirements determines how many LEED points are awarded for energy efficiency. Green Biz reports that energy codes are re-written about every three years, creating a moving baseline, which makes it difficult, but not impossible, to track industry improvements over time.

The results of the study indicate that while the number of LEED certified buildings has increased through the years, the relative efficiency achievement has remained constant. Since 2006, the average design efficiency has consistently stayed around 27 percent, according to Green Biz.

According to The Department of Energy, each new code baseline marks a significant jump in efficiency over the old. So although the level of efficiency in LEED certified buildings has remained “constant,” today’s LEED structures are far more efficient than they were years ago.