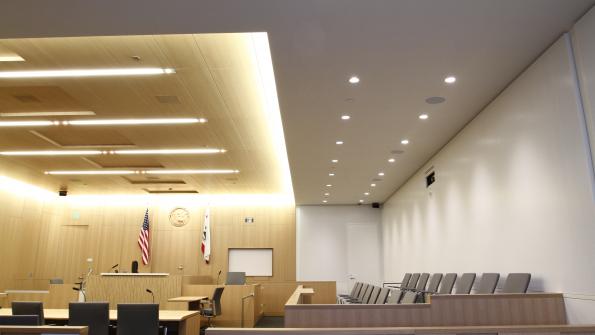 Mark Clough, president of Fellert North America, discusses one of his firm's ceiling system installations in a California courthouse. The system improved speech intelligibility in the facility.

Courtroom personnel at the Governor George Deukmejian Courthouse in Long Beach, Calif., can better hear important conversations, thanks to the installation of a Fellert Acoustical Plaster ceiling system.

“The Fellert system is highly sound absorbent,” says Mark Clough, who is president of Fellert North America. “This means that in a courtroom setting that speech intelligibility is greatly enhanced. The jury can hear and understand what the attorneys and witnesses are saying.”

“Think in terms of standing in a building, where you’ve got a lot of echo—like a big cathedral, or you are standing in a cave where there’s a lot of echo,” Clough told GPN. “A lot of sound is bouncing around and off the hard surfaces, and it’s very hard to be understood in that scenario. So what the Fellert product does is it reduces that reverberation time, so that there’s not a lot of echo or a lot of conflicting sound bouncing around while you are trying to communicate with someone.”

Approximately 30 individual courtrooms at the Deukmejian courthouse got the ceiling makeover. According to Clough, the completed ceiling project looks like finished drywall or traditional plaster. “There are no joints, seams or grid lines in the completed project to detract from the design of the ceiling and the overall space,” says Clough.

The spoken word can be hard to hear in a facility where the sound is bouncing around, he adds. For building managers in the process of choosing ceiling materials, Clough advises, “In any facility, building managers should have an NRC—a noise reduction coefficient—that is at least 0.80 or higher.”

Clough urges facility managers to check in with acoustical consultants during the design or renovation planning process. “The consultants, he says, can provide estimates of noise and sound reverberation times within a space. Editor’s note: here are two potential resources—the Acoustical Society of America and the National Council of Acoustical Consultants.

Fellert ceiling products control noise and reverberant sound in a variety of government facilities. The ceiling systems have been installed in museums, state houses institutional facilities and other government buildings throughout North America. Fellert North America is based in Kansas City, Kan.