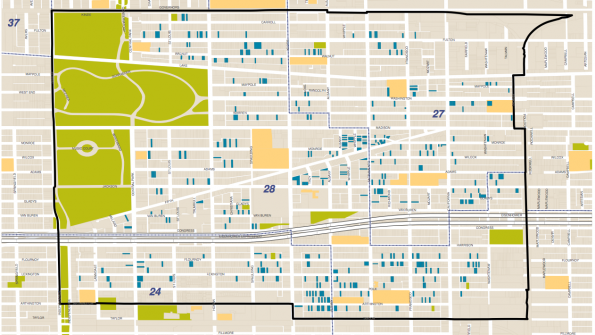 To cut down on blight and reinvigorate stagnating neighborhoods, Chicago is selling vacant lots for $1.

To cut down on blighted property and improve neighborhoods, Chicago is selling its vacant lots for a dollar a piece. The only caveat is that to buy one, you have to own a home on the same block.

Since the wave of foreclosures that crested during the Great Recession, Chicago has struggled to keep a growing number of empty lots full, according to National Public Radio. Vacant spaces can quickly become blighted – transforming into illegal garbage dumps or havens for drug dealers and gang members.

Efforts to develop affordable housing or plant community gardens in these spaces are having mixed results, NPR reports. But under the “Large Lot Program,” homeowners can buy these lots on their block for $1, as long as they don’t owe back taxes or have any outstanding debts with the city.

The proposed benefits, according to program materials, include:

According to city materials, the program is one of the recommendations of Mayor Rham Emanuel’s “Five Year Housing Plan,” which will use $1.3 billion in public funds from 2014 to 2018 “to create, improve and preserve more than 41,000 units of housing citywide.” The program was developed as part of the city’s Green Healthy Neighborhoods public planning process.

Lots purchased through the program can be used to “expand the yards of existing homes, for beautification, for gardens, for housing and other uses permitted by current zoning regulations,” according to city materials. Applicants must maintain ownership of the lots for at least five years, after which time they can sell the property for profit.

The citizen-driven lot transformations seem to be having an effect. Last week, Emanuel submitted an ordinance to the city council that would lease a 2,750 square foot lot to the Wicker Park Bocce Club for $1, the second such acquisition for the group, according to DNAInfo Chicago, an online local news source.

"Our first one was so successful, we wanted to do a second one," Alicia Harvey, one of the organization's co-founders, told DNAInfo. "It's been a fun way to have a different outdoor space than you would normally see."