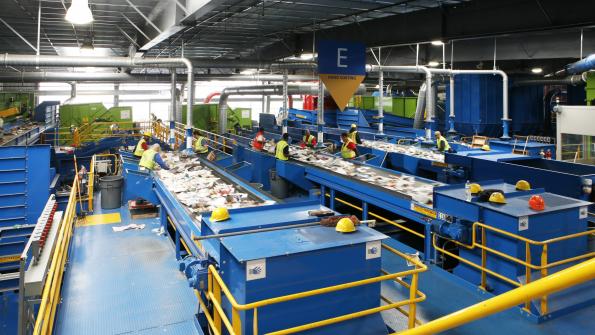 The Shoreway Environmental Center, a regional solid waste and recycling facility for the receipt, handling and transfer of recyclables, organics and garbage, serves San Mateo County, Calif.  Owned by RethinkWaste, a public Joint Powers Authority also known as the South Bayside Waste Management Authority, and serving over 450,000 residents, Shoreway is a model for sustainable building practices and innovative recycling and materials handling operations.

The master plan changes implemented by RethinkWaste have boosted diversion and significantly enhanced the environmental benefits of Shoreway.  The addition of single stream processing equipment has had an immediate benefit of increasing residential recycling 25 percent – diverting 8,100 additional tons per year from disposal and into commodities.  The collection program changes and improvements to the transfer station have yielded a 30 percent increase in organics materials diversion and an 88 percent self-haul diversion rate in 2012.

A grand opening was held in September 2011. Over 5,000 visitors toured the site in 2012 through a school and public tour program focused on teaching a resource conservation ethic.

Because the master planning process provided the opportunity to evaluate the overall site function from an integrated approach, RethinkWaste and the design team were able to think creatively about constructing the most efficient and sustainably-built recycling system.  This approach resulted in Shoreway becoming a certified LEED Gold facility by the U.S. Green Building Council in June 2012.  It also became a 2012 Recycling Systems Excellence Gold Award recipient from the Solid Waste Association of North America (SWANA), the top North American award for a recycling facility, in August 2012.