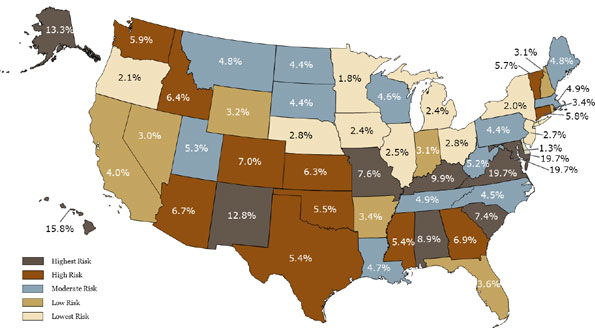 The effects would be felt unevenly from place to place

Maryland, Virginia and Alaska could be among the states hardest hit by pending federal spending cuts, according to a new report, while local areas like the District of Columbia, Huntsville, Ala., and Columbus, Ga., are also most at risk. The report, “Sequestration: Which States Are Most Vulnerable?,” from Wells Fargo Securities, projected the effect of so-called sequestration cuts in federal spending scheduled to begin on Friday.

The sequester cuts $85 billion in federal spending this year and $1.2 trillion over the next decade across both domestic and defense programs. The report said the greatest effects would likely come in places with the highest levels of federal spending.

Topping the list: the District of Columbia, Maryland and Virginia – the hub of U.S. government offices and workers – where total federal spending represents about 20 percent of economic activity, the highest level in the country. Defense Comptroller Robert F. Hale said residents in those three areas would lose $1.1 billion in civilian payroll cuts in fiscal 2013, according to The Washington Post.

Some areas are more directly vulnerable to Pentagon cuts because they have major aerospace or other defense industries, like Cobb County, Ga., and Fort Worth, Texas, both home to major production facilities for Lockheed Martin. Other at-risk areas, like Huntsville, Ala., and Columbus, Ga., host military bases. Alaska, meanwhile, is vulnerable on both fronts, with combined federal spending in defense and non-defense programs at 13.3 percent in 2010.

The top 10 places with exposure to cuts in non-defense federal spending, according to Wells Fargo, include: