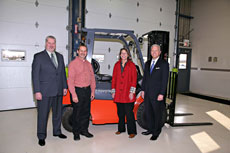 During a ceremony attended by local business leaders, TMHU President Jeff Rufener presented a ceremonial forklift key to Columbus Mayor Kristen Brown. In the photo, the mayor is the third person from the left in the red jacket. The donated lift truck is in the background.

The city of Columbus will use its lift truck at the City Garage, the distribution center for a variety of city services, to help load and unload supplies and equipment.

“We are grateful to Toyota Material Handling, U.S.A. for this generous donation,” said Mayor Brown. “This is a well-needed piece of equipment for daily operations at our City Garage. We had budgeted $35,000 to buy a new forklift next year, and this donation will provide a great savings to taxpayers. Toyota is a great community partner.”

TMHU donated the other lift truck to United Way of Bartholomew County (Ind.). The United Way chapter will use its Toyota forklift to transport and handle donations at its Doug Otto Center in Columbus. The center houses and supports not-for-profit agencies and programs.

“The donation of this forklift will benefit the 39 nonprofits and 47 programs in the Doug Otto Center,” said Mark Stewart, who is president of the United Way of Bartholomew County. “In the event of another disaster, the forklift will help process the tremendous volume of donations that are typically received. Having a new forklift will make such a difference.”

TMHU Vice President of Aftermarket Sales Terry Rains selected the Bartholomew United Way chapter to receive an additional $5,000 donation from TMHU. The monies will be used to support the organization’s initiatives, which include early childhood education, programs for individuals with disabilities and self-sufficiency programs for those below the poverty level.