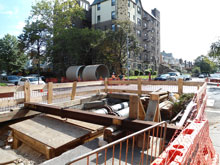 On Thursday June 28, 2012, a sinkhole appeared on 92nd Street near Third Avenue in Brooklyn, N.Y. The sinkhole, west of the sidewalk, caused 11 families to be evacuated from the nearby Bay Ridge apartment building. The block of 92nd Street between Third Avenue and Ridge Boulevard was closed to traffic as emergency crews from the city’s Department of Environmental Protection inspected the sinkhole. Crews worked to stabilize the 70-foot deep sinkhole and began planning a repair.

Houston-based Hobas Pipe USA was contacted regarding the availability of pipes suitable for the repair. The next day, Hobas advised that 120-inch-diameter, 46-psi pipe was available for immediate shipment. Within one day of receiving the purchase order, Hobas shipped the pipe to the jobsite. Although Hobas pipes are custom-manufactured for specific projects, it is not uncommon that existing inventory can be used for emergency projects.

Installation crews placed the pipe, finalized repairs and returned the sewer to service. A study of the current infrastructure was conducted as part of the project.

HOBAS (CCFRPM) pipes are centrifugally cast, glass-fiber-reinforced, polymer mortar. The large-diameter pipes are suited for nearly all corrosive piping applications. HOBAS pipes may be installed with a variety of installation methods. The company’s pipes can be economically designed for non-pressure and pressure service by varying the quantity, placement, and orientation of the glass-fiber reinforcements.