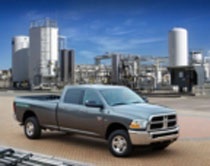 The announcement about the Ram Truck dealer awards came from the offices of Oklahoma Gov. Mary Fallin and Colorado Gov. John Hickenlooper. The governors are leading a bipartisan group of 22 states seeking to use compressed natural gas (CNG) vehicles in their state fleets.

The 13 Ram Truck dealers submitted formal bids in July in response to a multistate solicitation. The specific number of Ram 2500 Heavy Duty CNG pickup trucks being purchased in each state was not announced. The individual states now must finalize agreements with the dealers and issue purchase orders.  The multistate solicitation was designed to encourage auto manufacturers in the U.S. to develop more functional and affordable compressed natural gas vehicles and to encourage investment in public refueling infrastructure.

Earlier this year, both governors traveled to Detroit to meet with Chrysler Group and other automakers about the project. In July, the states issued a request for proposal soliciting bids for compressed natural gas sedans, pickups, and vans to be used in state fleets.

The Ram 2500 Heavy Duty CNG pickup is powered by the 5.7-liter Hemi V-8 and features both compressed gas storage tanks and a choice of 8- or 35-gallon gasoline fuel tanks. Redesigned cylinder heads with specifically designed CNG compatible valves and valve-seat materials allow the engine to burn both fuels. It also gets a second, CNG-specific fuel rail and set of injectors. New spark plugs improve combustion and durability, and a new powertrain control module allows the HEMI to seamlessly operate on either of the two fuel sources.

The Ram 2500 CNG system was engineered and tested by Chrysler Group and assembled at the company’s Heavy Duty truck plant in Saltillo, Mexico.

Commenting on the multistate solicitation, Oklahoma Gov. Fallin said: “The initiative has been enormously successful. We asked auto manufacturers to develop products that were more affordable and functional. With the combined purchasing power of our 22 states, we successfully provided the incentive to do so. States will now have the incentive and ability to begin converting their fleets to CNG while saving millions of dollars in taxpayer money.” Over 100 bids were submitted by dealerships in 28 states throughout the nation representing four vehicle manufacturers.

Fallin said the movement to CNG vehicles would help the environment and boost the economy. “CNG vehicles represent a key component of the movement towards American energy independence,” Fallin said. “Converting state fleets to CNG promotes the use of a cleaner burning, more affordable fuel that is made right here in the United States and supports the creation of American jobs.”