Energy-saving systems that are being tested on ambulances in the Austin-Travis County, Texas EMS fleet are expected to reduce emissions and maintenance bills. 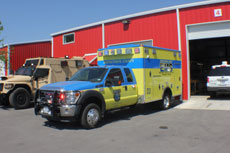 Energy-saving systems that are being tested on ambulances in the Austin-Travis County, Texas EMS fleet are expected to reduce emissions and maintenance bills. Technicians are installing prototype battery packs from Austin, Texas-based Energy Xtreme on each vehicle. Each power pack includes four batteries and an inverter that will keep the air conditioning, heater, refrigerator and radios running for more than an hour without burning fuel.

“[Paramedics] can park at the hospital while they’re waiting for their next call and shut the engine off. They don’t have to leave it running,” said Energy Xtreme technician Wes McGee. The power pack weighs between 400 and 500 pounds and is about 3.5 feet long. It is mounted underneath the ambulance toward the back.

“We think it’s really going to make a difference,” said James Shamard, Austin-Travis County EMS chief of staff. Shamard has calculated the time and gas wasted idling and believes the battery pack will improve gas mileage by 1.6 miles a gallon. Shamard said the total cost for the prototype is still being calculated. If all goes well when the prototype ambulance battery pack hits the road, all new ambulances in the Austin-Travis County EMS fleet will come equipped with the new battery power.

A smaller version of the pack that Energy Xtreme has installed on many Austin, Texas police patrol cars costs $3,500 each. The power pack allows officers to transfer video from their dashboard cameras, which can take up to four hours, with the engines off. The batteries are recharged each time the engine is turned back on.

Ambulances require almost constant power. They need power to operate onboard equipment and provide a controlled-temperature cabin environment for life-saving medicines and patient care. To provide this power, ambulance operators have to idle the vehicle engines for extended periods of time. This includes any time the vehicles are not parked and plugged into their stations, such as on-scene and after delivery of patients to hospital emergency rooms.

In one hour, an ambulance burns 1.5 gallons of fuel. The exhaust fumes from idling ambulances are a continuing health risk to the paramedics and EMS technicians. The fumes infiltrate the hospital emergency rooms — exposing patients, staff and visitors to toxic and carcinogenic air contaminants. Additionally, ambulance drivers who leave the vehicles unattended pose an added public safety risk and liability for government EMS departments.

Idling drives up ambulance maintenance costs. Due to excessive engine hours caused by idle time, most ambulances are out of warranty within 6 months. For a typical ambulance, oil and diesel particle-clogged filters are changed every 7 to 9 days, costing approximately $200 per vehicle. The filter-change process yields an annual cost of $9,125 for basic maintenance. In addition to those charges, public EMS agencies need to contend with skyrocketing diesel fuel costs that average $4.07 per gallon. The agencies are also dealing with rising health care costs that are straining budgets.

Energy Xtreme’s Mobile Electric Power Idle Reduction system reduces up to 10 hours of idling per 24-hour shift. According to the company, the system helps ensure a longer life for the ambulance engine and chassis. The company’s Independence Package idle reduction system is a smart power management device that provides power, without engine engagement, to vehicles with demanding electrical needs. For ambulances, the system allows full operation of on-board electrical systems — including lights, HVAC, refrigeration, communications, computer and other AC power needs — without having to idle the vehicle’s engine — for two hours or more. The system recharges off the vehicles alternator while the vehicle is being driven or idling, or can be re-charged from shore power. The system provides immediate access to power when it is needed.