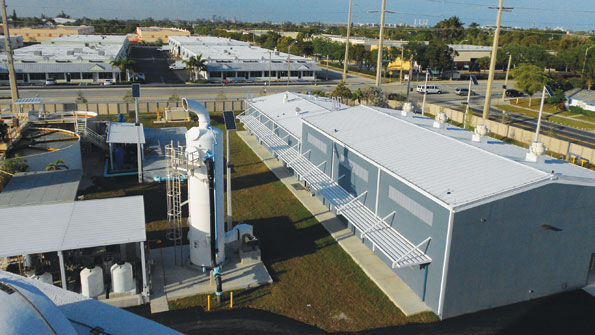 Dania Beach, Fla., recently worked with students and faculty at Florida Atlantic University (FAU) to design an expanded water treatment plant to improve water quality and meet the needs of the city’s growing population. The resulting plant contains a nanofiltration/reverse osmosis membrane process and has received a Leadership in Energy and Environmental Design (LEED) Gold certification from the U.S. Green Building Council.

Over the last few years, the city’s aging 3 million-gallon-per-day (mgd) lime softening water treatment plant has begun facing increasingly stringent regulations and increasing demands to serve a growing population. The Public Services Department, which operates the plant, has been working with Frederick Bloetscher, associate professor in the FAU College of Engineering and Computer Science, for several years, and he assigned two groups of students to design solutions for the city. The students analyzed the existing process, site and design issues and submitted conceptual designs as their capstone projects. “This collaboration is a great example of how industry may harness the power of student and faculty intellectual capital for projects that positively impact the economy and environment of our region,” Bloetscher says.

In late 2009, the city contracted with CDM Smith to design and build a 2 mgd nanofiltration process addition, which drew on the student design concepts, including a path to LEED Gold certification. The resulting membrane system, which was completed in 24 months from contract award, includes a two-stage nanofiltration membrane system with convertible third and fourth-stage reverse osmosis units that provide the flexibility to treat variable quality raw water sources, achieve high system recovery (95 percent), and minimize raw water consumption and concentrate disposal costs.

To achieve LEED certification, the facility includes many green building features, such as an energy-efficient HVAC system, low-flow water fixtures, and a white roof. Recycled steel and concrete, minimal waste disposal, and no-VOC or low-VOC materials were used in the construction, and alternative transportation to the site is encouraged. To control energy demand for the treatment system, variable frequency drives and highly efficient motors and controls were incorporated into the nanofiltration equipment. Stormwater is managed and treated on site, and native plants are used for landscaping.

Funded by an $8.82 million loan agreement with the U.S. Department of Environmental Protection under the State Revolving Fund, which included $2.55 million of ARRA stimulus funding, the new facility has improved water quality for customers, while decreasing lime and disinfection chemical costs. It has sufficient capacity to meet the city’s water needs for the next 20 to 30 years and to meet future drinking water standards. The facility has received several awards, including one from the U.S. Environmental Protection Agency for sustainable infrastructure.