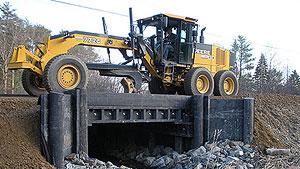 The state of public works and transportation construction

Editor’s note: The following is the fourth of a six-part series on government budgets and government spending that comprise the Keating Report mid-year 2012 forecast. The topics we are covering include: federal fiscal trends, state finances, local government fiscal realities, public works and transportation construction, public-private partnerships and economy and government purchases.

Congress has finally approved a two-year transportation funding bill, that includes construction monies, after lengthy delays and false starts. The Washington-based American Association of State Highway and Transportation Officials, the NLC and other groups led the charge in pleading for a new bill. In spite of the gridlock, numerous transportation-related or general public works projects are under way or recently completed. 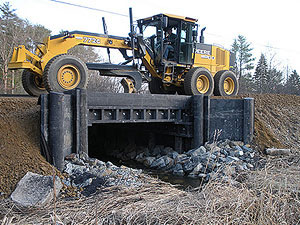 The Birch Hill Road Bridge project in York, Maine, is a monument to green construction. The structure is built completely out of recycled plastic — a first for a public roadway bridge in the U.S. The bridge superstructure is made of recycled plastic girders, and the unit’s substructure parts — including piles, pier caps, backwalls and wingwalls — are built from recycled thermoplastic.

The bridge’s materials were produced by New Providence, N.J.-based Axion International. The company recovers materials from discarded consumer plastics, such as laundry detergent, milk and juice packaging, and mixes them with unused scrap from the automotive and computer/IT industries to create I-beams, pilings and railroad ties. Axion’s facility in Portland, Pa., produced the prefabricated parts for the bridge. Parts were shipped to the construction site on a flatbed truck for assembly.

The new bridge supports two traffic lanes over a stream. New York-based Parsons Brinckerhoff designed the structure. Much of the bridge was completed in December 2011. Cold weather delayed installation of the structure’s asphalt overlay until the spring. The bridge has an expected service lifespan greater than 50 years. 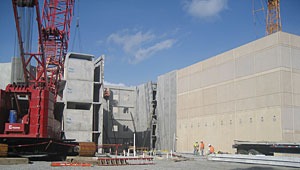 A $71 million expansion of the Chatham County Detention Center in Savannah, Ga., features rear-chase precast concrete prison cells and modular building components. The cells, from Littleton, Colo.-based Oldcastle Precast, have the electrical and plumbing fixtures on the back wall and monolithic balconies on the front and rear of the module.

The cells arrive at the construction site outfitted with electrical fixtures, detention furniture, plumbing fixtures and interior walls painted. Detention center management preferred a rear-chase option that allows maintenance personnel to access the mechanical systems without having to disrupt the prison’s daily routines. The first precast cells arrived on site for the detention center expansion project in November 2011. A 30-ton crane lifted the cells into place. Each concrete unit weighs more than 50,000 pounds and contains two cells, and front and rear balconies. The cells are stacked four stories high. Oldcastle installed the last precast cell on May 3.

The project is adding 400,000 square feet to the detention center and bringing the total number of inmate beds to 2,300, nearly double the current capacity. The precast prison cells will accommodate 852 new inmate beds in two- and four-level housing. The facility’s expansion will include a freestanding video visitation building (which replaces in-person visitation), courtrooms, court holding area, pre-booking area, medical clinic and infirmary, laundry, kitchen, street operations, warehouse and commissary. The Chatham jail expansion should be ready for occupancy in January 2013.