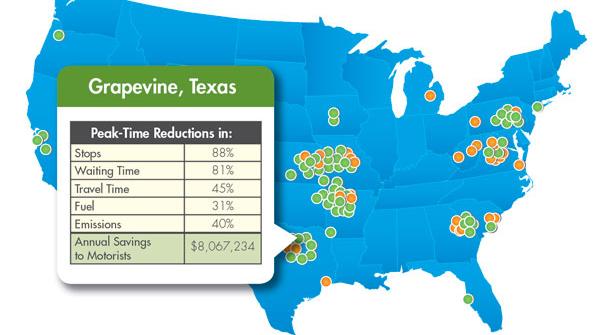 Although fewer than 50,000 people live in Grapevine, Texas, more than 300,000 drivers pass through it each day on their way to and from the Dallas-Fort Worth International Airport. Freeway accidents, road construction, shopping centers and events in the area make traffic volume on Grapevine’s arterial corridors highly variable. Unpredictable traffic surges make driving stressful for commuters and pose a big challenge to the city’s traffic engineering department.

To improve driving conditions, city engineers considered retiming the traffic signals but eventually decided instead to implement InSync adaptive traffic control from Lenexa, Kan.-based Rhythm Engineering. “We wanted a long-term solution rather than a short-term solution that would have to be redone every three to five years,” says Mike Pacelli, transportation manager for the city.

In July 2010, the city started installing InSync at 52 intersections, representing 90 percent of the city’s signals. At each intersection, the system includes IP digital cameras that connect to a processor inside the traffic cabinet that communicates to the signal controller. The technology counts vehicles passing through the intersection and adapts the signal timing to match actual demand. When and for how long green lights are served changes based on the number of cars present and how long they have waited at a red light. Several intersections can be synchronized so drivers get green lights as often as possible on a busy corridor. The signals also can be configured, monitored and managed through a web page using a standard browser.

According to data collected by Dallas-based Lee Engineering, the system has reduced traffic stops by up to 85 percent and has reduced travel time for motorists by up to 42 percent. “It operates with the intention of always keeping vehicles moving,” Pacelli says. “With traditional signal coordination, vehicles can wait at a red light, and traffic gets backed up when no one is using the green light on the main street. This system always keeps someone moving, and it does, therefore, make the intersections appear to be more effectively used and waste less time.”