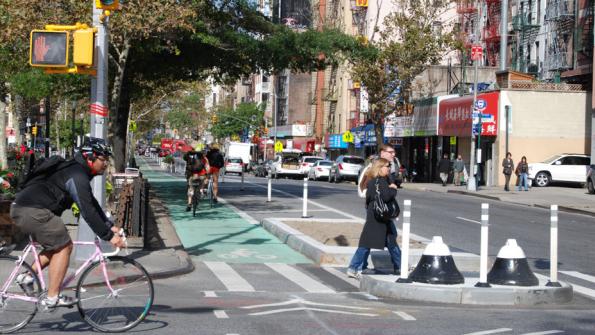 City initiatives ranging from bike lanes to share programs are creating jobs as an added benefit.

Cities are turning to cycling-related initiatives as a way to reduce traffic congestion and improve quality of life for residents. They also are finding another benefit of investing in bike infrastructure: a stronger local economy.

A 2011 report from the Political Economy Research Institute at the University of Massachusetts found cycling infrastructure creates the most jobs for each $1 million spent compared to pedestrian-only and road-only projects. For the 58 projects in 11 states examined, each $1 million invested resulted in 11.4 jobs within the state.

This past fiscal year, Portland, Ore., spent $7 million — 5 percent of the city’s total transportation budget — on bicycle programs, the most the city has ever spent in one year. The money partially was used to create bicycle boulevards, low-volume roadways that serve as primary routes for cyclists. To date, Portland has installed 47 miles of bike boulevards; it built 15 miles this year and plans to add another 15 miles in 2012.

Roger Geller, bicycle coordinator for Portland, believes that bicycle infrastructure is the most effective expenditure of transportation dollars. Portland’s investment generated $90 million in bike-related economic activity in 2008, including consulting, retail and manufacturing.

Boston, which looks to Portland for inspiration, began its bicycle initiative in 2007 when Mayor Thomas Menino included cycling as part of his vision for a vibrant and healthy Boston, says Nicole Freedman, director of bike programs for the city. Bike-related jobs in the city — including manufacturing, retail, tourism and contracting — increased 60 percent between 2007 and 2010. The increase is a direct result of city initiatives, which range from a bike-share program to annual events that encourage bicycle commuting.

Started in July 2011, Boston’s bike share program placed 600 bikes at 60 stations across the city for public use. In its first six months, the bike share program has enrolled 36,000 members and recorded more than 140,000 trips, and has generated more than $321,000 in annual and daily subscription fees as of Oct. 31. Boston also hosts Hub on Wheels every September, an organized bike ride that offers a new perspective on the streets of Boston.

“Cycling is very important to the health and sustainability of a city,” Freedman says. “You especially have to look at the economic health.”