Less Christmas cheer in one park this year 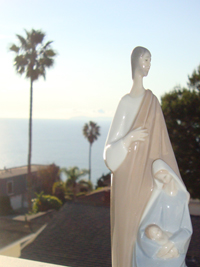 For nearly 60 years, nativity scenes have graced Palisades Park in Santa Monica during the holiday season. This year, however, visitors to the park will be seeing a lot less of Mary and Joseph thanks to a city lottery system that allocated most of the available spots to atheists.

Typically, the group of churches that puts up the displays doesn’t have much competition for the 21 spaces available, according to a Santa Monica Daily Press story. But after 13 people applied for the spots, City Hall created a lottery system to divvy them up. The churches didn’t fare well, winning two spaces — enough room for three displays instead of the usual 14.

Since the individuals who won all but three of the spaces are not Santa Monica residents, a spokesperson for the churches asked the city to give locals preference in the selection process. The city attorney said that winter displays fall under First Amendment rights, which don’t have geographical boundaries.

So, for now, most of the nativity displays will remain in storage, hoping for better luck next year.