The founders of the FedSmith.com federal workplace portal have shared their opinions on several topics with Govpro.com. In Part 4, Ralph Smith describes the comments readers post on the portal about salaries, benefits and campaigning. 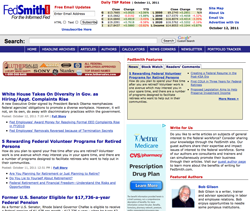 The founders of the FedSmith.com federal workplace portal, Ralph and Ian Smith, have shared their opinions on several topics with Govpro.com. In Part 1, Ian Smith spoke of the “targeting” of government workers because of the budget problems that Congress and federal agencies are facing today. In Part 2, the Smiths discuss the need for technology upgrades to help government employees become more productive. In Part 3, Ralph Smith discussed the efforts of some federal agencies to ban FedSmith’s comment section because they consider it to be a social media. In Part 4, below, Ralph Smith describes the comments readers post on the portal about salaries, benefits and campaigning.

Govpro: The FedSmith site gets about 2 million page-views and a half-million visitors every month, and many of those visitors are federal employees. Are state and local government workers looking at FedSmith also?

Ralph Smith: We know that that’s the case, because we’ve run some articles, as an example, about restrictions on Social Security payments to retired federal employees, and based on the response, those restrictions obviously impact public school teachers and some state and local government employees, as well. We got a lot of traffic from people who said, ‘Yes, I have the same issue, because I’m a retired teacher.’ Obviously, they aren’t federal employees but they work for school districts or states or municipalities or other government agency.

Govpro: It sounds like government pay and benefits and pension plans for government workers can sometimes be controversial topics that generate lots of emotion and even anger.

RS: I can tell you this: we can’t print some of the comments we get. Our FedSmith site has had a couple of items on the Windfall Elimination Provision and Government Pension Offset that are two provisions of the Social Security law. The other topic that comes up that affects state and local government workers more than I had appreciated at first is the Hatch Act. Not often, but some federal employees get in trouble because they violate the Hatch Act, for example, by sending out e-mails campaigning for or against a person running for president, and sometimes they get fired as a result of it. That kind of provision applies increasingly to state and local governments.

The U.S. Office of Special Counsel, an independent federal investigative and prosecutorial agency, has an expanded role in promoting compliance to the Hatch Act. Even in small towns across the U.S., we see news articles popping up, such as a person who is a sheriff was going to run for mayor, etc., and isn’t allowed to until he resigns his office as sheriff. So, that starts impacting a lot of state and local government officials who want to move up and didn’t even realize that the Hatch Act would apply to them.

Govpro: That sounds like a restriction on the rights of state and local government workers.

RS: We can’t print some of the comments we get on that, as well, according to our lawyer, because people have very strong opinions. It’s a complex, controversial issue, and it should be controversial, because they’ve expanded the Hatch Act to include those who work for state or local governments, but their agency is getting federal grants. That starts covering a whole lot, maybe even most state and local governments, so you are eliminating many government workers who might be very good at a higher elected office, but who can’t run, as either a Republican or Democrat, because of the Hatch Act.

Bruce Fenton’s views that federal salaries, in general, are far higher than pay for comparable civilian workers, drew a lot of comments at Govpro.com.