Top public works officials see rise in salaries and decline in benefits as many head to retirement.

A lot of water has passed through the pipes in the past seven years, but how have the local governments’ gyrations during that time affected the average public works director? When American City & County last asked them about their compensation in 2004, the average respondent was 51 years old and male. Today, males continue to dominate the profession, but a few notable changes have occurred. For example, the number of women in the top public works job increased from 4.6 percent to 7.8 percent — with counties reporting 16.7 percent female public works directors versus 6.4 percent in municipalities. And, unlike seven years ago when no salary decreases were reported, one in 10 public works directors said their salary was cut in this year’s survey.

For the most part, current public works directors appear similar to the previous survey, with one big exception: those 60 and older. In 2004, 14.1 percent of respondents were over age 60, while today that percentage has increased to 21.1 percent, possibly as a result of many of them being unable to afford to retire. The number of 30- to 49-year-old public works directors also increased in the past seven years, while there are now fewer directors age 50 to 59. 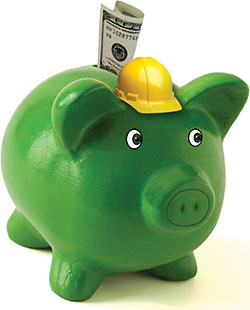 Salary increases were reported by 41.4 percent of this year’s respondents versus 76 percent in 2004. Approximately 75 percent of those who noted an increased salary received a 1 to 3 percent bump. Salaries remained the same for slightly more than 48 percent of respondents, compared to 24 percent seven years ago, but the big change was the more than 10 percent of today’s respondents who reported decreased compensation.

Benefit declines in some areas

A decade of recessions and budget cuts have left today’s public works directors with similar challenges to 2004. However, in 2004, public works directors reported that their top two challenges were funding and number of employees. In 2011, 87 percent of the respondents named budget/funding as one of the three most important challenges they face, and only about 22 percent listed number of employees as a challenge. Infrastructure quality rose to the second most important challenge (nearly 54 percent) followed by public expectations (around 45 percent).

Three questions were added to this year’s public works compensation survey, including one about retirement plans. While the number of respondents age 60 or older increased between the two surveys from roughly 14 percent to more than 21 percent today, nearly 39 percent of respondents said they were going to retire in the next one to five years. Further, of those reporting they will retire in the next five years, about 89 percent of respondents 60 and older say they will retire, versus approximately 55 percent of those 55 to 59 years old.

In other survey findings, the majority (56 percent) of respondents have been in their present position between two and 10 years, and 59 percent have college degrees (either a bachelor’s, master’s or doctoral degree). The survey was mailed in early August 2011 to all American City & County subscribers with a public works director, superintendent, supervisor or similar title.