A growing number of county elected officials think the country is headed in the wrong direction, according to a survey from the National Association of Counties. 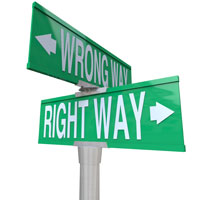 A growing number of county elected officials think the country is headed in the wrong direction, according to a survey from the Washington-based National Association of Counties (NACo). Sixty-two percent of respondents to the 2011 survey said the nation is on the “wrong track,” up from 59 percent in 2010. The percentage of those who say the country is headed in the “right direction” declined by 5 percentage points, from 32 percent in 2010 to 27 percent in 2011, according to NACo’s eighth annual National Survey of County Elected Officials, released in July.

The survey, which covers several topics regarding the state of the nation and the economy, also found that 65 percent of respondents think that partisan differences are a growing problem. Seventy-one percent of Democrats say it is a bigger problem today, as do 69 percent of Independents and 60 percent of Republicans. Overall, 57 percent said partisan politics is bad for American democracy. Despite that, 73 percent believe a divided government is better than having the White House and Congress controlled by the same party.