Achieving sustainability remains an important goal of many local governments, but turning abstract goals into concrete action remains a challenge, according to a new survey from the International City/County Management Association. 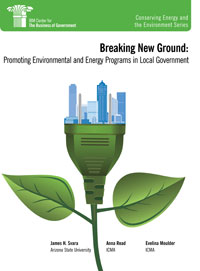 The survey found that most governments were still at the early stages of adopting a full range of measured sustainability activities, but most agreed that sustainability is an important goal. “Sustainability is the ability of communities to consistently thrive over time and involves making decisions to improve a community today without sacrificing its future,” says ICMA Chief Operating Officer Ron Carlee. “Increasingly …sustainability is considered in the context of a ‘triple bottom line’ — the environment, the economy and social equity — three dimensions necessary for society to flourish in the near and long term.”

• There is considerable variation in the extent to which sustainability actions have been implemented by local governments. Most local governments report recycling (90 percent), improving transportation (81.7 percent), and reducing building energy use (80.6 percent), while only 36.2 percent have made efforts to reduce energy use by altering work schedules or processes, and only 23.4 percent employ alternative energy generation.
• Sustainability initiatives that target specific community needs are most successful.
• Goal setting and progress measurement are important for all communities. Whether a large city or a small town, communities need to establish goals and targets, and measure progress in a quantitative manner through baseline studies.
• Many governments have at least begun to get involved in sustainability, and an expected number of local governments are setting an example for others.
• A community’s policy priorities correlate to its level of activity in specific sustainability activities. While jurisdictions that placed a higher priority on the economy reported only modest sustainability activity, communities that assigned a high priority to green jobs or climate change, for example, reported the strongest association with action in that area.