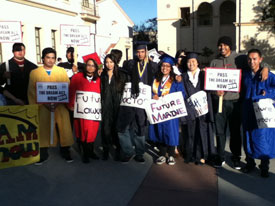 California has opened the door to higher education for young people, regardless of their immigration status. Beginning July 1, 2012, undocumented immigrant youths will be eligible for state financial aid programs, with the stipulation that they file an affidavit with the college or university of their choice stating that they have applied for a lawful immigration status or will apply as soon as they are eligible to do so.

The Dream Act, signed into law Monday by Gov. Edmund Brown, gives undocumented teens access to programs such as the Board of Governors Fee Waiver, Institutional Student Aid and Competitive Cal Grants programs. Despite debate over the costs of the bill, Brown said at the bill signing that it was a necessary investment. Brown cited state statistics that showed that more than half of babies born in the state were under the Medi-Cal program for low-income families. “Fifty percent of California’s future is coming out of very low-income situations,” he said. “So, our future is uncertain if we neglect those children, but it is absolutely abundant if we invest in their education, their childcare, their future, their neighborhoods.”

Along with the immigration status affidavit, students applying for aid under the bill must have attended secondary school in the state for three or more years, including at least one year at a California high school, and they must have graduated from a secondary school or have an equivalency degree.

Read more about the Dream Act. Watch the video of Brown signing the bill below, beginning at the 27 minute mark.