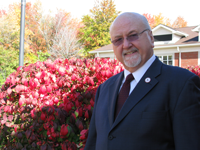 Editor’s note: Don Kuchta, mayor of Macedonia, Ohio, offers his views (below) on the state of highway funding in the United States. In the preface to his remarks, the mayor said: “The February 2011 issue of Government Product News (the sister publication of govpro.com) caught my eye when it headlined fuel-efficient trucks. Fuel efficiency has to be a consideration for every municipality there is. Saving money to keep the services we perform for our residents is tough. Every part of local municipal government is economically tough!

“There is a flip side to the gas efficiency coin, though. When I became mayor eight years ago, I inherited tons of debt and a crumbling infrastructure. We had a 105-year-old railroad bridge on our main road, and arterial roads that had not been fixed since Kennedy was president! State and federal taxes on gasoline [have] allowed me to attack our roadblocks, and I am just going to be starting the construction of my second bridge.

“The pot for gas tax funding as the source of road repairs continues to get smaller. We can’t let that happen in America. Our roads and bridges are deteriorating, and we must not let them go to ruin.”

Every time you buy a gallon of gas, it includes federal and state taxes that are designated to our roads — not your street and my street, but main roads. That system worked very well until the federal government put the squeeze on automobile manufacturers to improve their gas mileage in the 1970s. They did their best to comply. We have used less fossil fuel and saved a ton of money in our wallets since they did that. Thank you!

Yeah, but….as miles per gallon soared, gallons purchased and used plunged. Money for the much-needed maintenance and repairs in the pot for bridges and highways is dwindling fast. How does that affect you and me? We are in a recession partly because of the roadwork not being done and the trickle effect. When roads are being built in Macedonia, Ohio, it brings money to you and me in the form of city income taxes. Most of the jobs involved with building roads are good-paying jobs, so that is actually bigger bucks than retail sales where employees earn minimum or almost minimum wages. The construction workers may even buy lunch in our town, or gas, or socks at Walmart, or an anniversary present from Basch Jewelers. Doing that keeps the need for [hiring] employees up. That’s a good thing.

But the sad part is that as the world evolves, the gasoline engine is the enemy. I am not anti “green.” I have grandchildren. I want to leave them an Earth that is as clean as possible. But, as the money to pay for highway construction dwindles, so does our infrastructure, and so does the economy.

So, can somebody tell me why there are cars driving on roads built and maintained by state and federal gas taxes, that pay nothing? That is why I called it highway robbery. There are cars that are part electric and part gas. There are vehicles that burn fuels other than gas, i.e., propane and natural gas. And now, totally electric cars that supposedly don’t burn fossil fuels. (But, if you ever watch “Modern Marvels” or shows like them, you know that most of the electricity in this country is generated by the use of oil or coal!)

Maybe instead of spending millions of federal dollars to develop cars that don’t burn gas, we had better rethink this to get back the ability to take care of roads and bridges. There must be a way to fairly share this burden that most of us carry, so that all of us share the cost. We need to find the solution that will stop the highway robbery and bring back JOBS!

Don Kuchta is mayor of Macedonia, Ohio, and president of the Summit County Mayor’s Association. His e-mail is [email protected]. The city of Macedonia’s website is http://macedonia.oh.us

Editor’s note: Govpro.com has written about fuel-efficient vehicles, including
hybrid trucks in California,
hybrids in federal fleets and the
challenges of alternative fuels.