North Dakota: Is it part of Canada now?

For the past 122 years, the people of North Dakota had the audacity to think they actually lived in a state. Turns out, they were wrong. 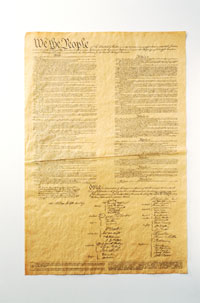 For the past 122 years, the people of North Dakota had the audacity to think they actually lived in a state. Turns out, they were wrong, or so 82-year-old Grand Forks, N.D., resident John Rolczynski has been saying for years, according to the Associated Press (AP).

Now, it would appear that Rolczynski has been right this whole time when he claimed that an error in the state’s constitution means that technically, North Dakota is not a state. In 1889, North Dakota was carved out of the Dakota Territory and admitted to the Union at the same time as South Dakota. But, it turns out the governor and other top officials must take an oath of office, a requirement that was a omitted in the state constitution by the state’s founders — putting the document in conflict with the federal constitution, according to AP.

It has been Rolczynski’s contention for the last 16 years that the omission made the state illegitimate. State Sen. Tim Mathern heard the argument and agrees, so he has introduced a bill fixing the mistake that will be put to voters this spring. Rolczynski says he’s happy he lived to see the error corrected, but he’s not finished. The historian claims he’s found another error in the constitution, this time having to do with the state’s eastern border, but the details are still forthcoming.