July is parks and recreation month

As summer kicks into full gear during July, the National Recreation and Park Association is promoting the importance of parks and recreation in establishing and maintaining healthy lifestyles and communities. 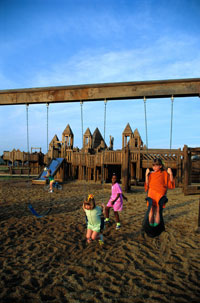 As summer kicks into full gear during July, the Ashburn, Va.-based National Recreation and Park Association (NRPA) is promoting the importance of parks and recreation in establishing and maintaining healthy lifestyles and communities. During Park and Recreation Month, NRPA helps agencies plan special events and initiatives that remind local officials and residents of the role that parks and recreation play in the lives of Americans.

This year’s theme is “Rock Your Park,” and NRPA is encouraging people to create a habit of getting out to a park, trail, playground, swimming pool, natural area or other public space every weekend this July. Part of that effort is NRPA’s “Five in July Park Pledge,” an online registration of residents who promise to go to their area parks every weekend during the summer. “According to recent studies, about one-third of Americans struggle with inactivity, obesity and associated health challenges,” said NRPA CEO Barbara Tulipane. “Now is time for change. Through Park and Recreation Month, we’re encouraging Americans to get out, get active and get healthy.”

NRPA also is hosting a national “Rock Your Park” Flash Mob Contest. Residents are encouraged to put together a group of people and show the power of parks together in flash mob form. Also, NRPA is hosting its second annual July Social Media Project in which participants take photos with the official “Rock Your Park” social media sign and post them on their favorite social media sites.