On Thursday, the U.S. Supreme Court upheld an Arizona law that requires employers to use the E-Verify database to ensure the legal immigration status of new employees. 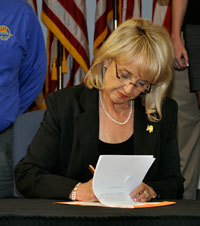 On Thursday, the U.S. Supreme Court upheld an Arizona law that requires employers to use the E-Verify database to ensure the legal immigration status of new employees. The U.S. Chamber of Congress had sued the state, saying its Legal Arizona Workers Act (LAWA) violated the federal Immigration Reform and Control Act (IRCA), which prohibits states from enforcing federal immigration laws with civil or criminal penalties.

The Supreme Court upheld several minor court decisions that found LAWA, which was passed in 2007, did not violate IRCA because it only threatened to repeal the licenses of businesses that employ illegal aliens or which failed to use E-Verify.

The District Court found that the plain language of IRCA’s preemption clause did not invalidate the Arizona law because the law did no more than impose licensing conditions on businesses operating within the state. Nor was the state law preempted with respect to E-Verify, the court concluded, because although Congress had made the program voluntary at the national level, it had expressed no intent to prevent states from mandating participation. The Ninth Circuit affirmed.

“While IRCA prohibits states from imposing ‘civil or criminal sanctions’ on those who employ unauthorized aliens, it preserves state authority to impose sanctions ‘through licensing and similar laws,’ Chief Justice John Roberts writes in the decision. “That is what the Arizona law does — it instructs courts to suspend or revoke the business licenses of in-state employers that employ unauthorized aliens.”

Arizona Gov. Jan Brewer said she “could not be more gratified” by the court’s decision. “Arizona’s employer sanctions law allows the vast majority of businesses that want to play by the rules to comply with federal and state laws against hiring illegal aliens, and seeks to punish those employers who take advantage of the federal government’s immigration failures,” Brewer said in a statement. “One result of the Legal Arizona Workers Act: Arizona employers now lead the nation in the use of the federal E-Verify system for determining the legal status of new employees.”

Brewer goes on to say that she hopes the Supreme Court’s decision on LAWA bodes well for the state’s planned appeal of a Ninth Circuit Court of Appeals decision in July that barred implementation of key parts of Arizona’s controversial immigration reform law S.B. 1070. S.B. 1070 would empower law enforcement officers in the state to check the immigration status of criminal suspects, but the Ninth Circuit Court threw out that part of the law in a lawsuit brought by the Obama administration. “While S.B. 1070 and [LAWA] are obviously different laws, I am hopeful and optimistic that the Supreme Court will hear Arizona’s future appeal of the decision against S.B. 1070 and apply the same general principle of federalism by rejecting claims of federal preemption,” Brewer said. “In light of [the court’s] decision [on LAWA,] I am more adamant than ever that states do have a complimentary role in enforcing federal immigration laws, despite the Obama administration’s opposition at every turn.”