Nearly 70 percent of city residents have access to transit service of some kind where they live, but they can only reach about 30 percent of jobs in their area via transit, according to a new report from the Brookings Institution. 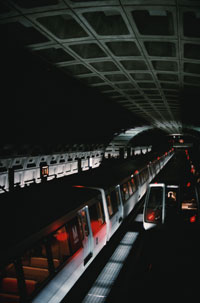 Nearly 70 percent of large metropolitan area residents live in neighborhoods with access to transit service of some kind, but residents can only reach about 30 percent of jobs in their area via transit in 90 minutes, according to a new report from the Washington-based Brookings Institution. With governments at all levels considering deep budget cuts, officials need to keep transit as a priority and ensure that it connects residents to jobs.

“Missed Opportunity: Transit and Jobs in Metropolitan America,” an analysis of data from 371 transit providers in the nation’s 100 largest metropolitan areas, reveals that transit coverage is highest in western metro areas, such as Honolulu and Los Angeles, and lowest in southern metro areas, such as Chattanooga and Greenville. Regardless of region, residents of cities and lower-income neighborhoods have better access to transit than residents of suburbs and middle/higher-income neighborhoods. “There is a paradox between where the transit coverage is serving residential locations and how well people can use that transit system to get to jobs,” says Robert Puentes, a senior fellow at Brookings.

Cities that have invested in transit systems across the city, not just in residential areas, did a better job of transporting residents to jobs, Puentes says. Workers living in cities that suffer from “job sprawl,” where jobs may be concentrated in the central cities to some extent but also are extensive all across the metro area, saw the greatest disconnect in transit service, he says. “It’s hard to serve those jobs by transit,” Puentes says. “[Places of employment are] usually at lower densities, they’re spread out and they’re not concentrated in such a way that transit works best.”

• Fifteen of the 20 metro areas that rank highest on a combined score of transit coverage and job access are in the West. Top performers include metro areas with noted transit systems such as New York; Portland, Ore.; San Francisco, and Washington, but also Salt Lake City; Tucson, Ariz.; Fresno, Calif.; and Las Vegas. Conversely, 15 of the 20 metro areas that rank lowest are in the South.
• In neighborhoods covered by transit, morning rush hour service occurs about once every 10 minutes for the typical metropolitan commuter. In less than one quarter of large metro areas, however, is this typical service frequency, or “headway,” under 10 minutes. These include very large metro areas such as New York, Los Angeles, Houston, and Washington. Transit services city residents on average almost twice as frequently as suburban residents.
• Job access differs considerably across metro areas, from 60 percent in Honolulu to just 7 percent in Palm Bay, Fla., reflecting variable transit coverage levels and service frequencies, and variable levels of employment and population decentralization.
• Among very large metro areas, the share of jobs accessible via transit ranges from 37 percent in Washington and New York to 16 percent in Miami.
• About one-quarter of jobs in low- and middle-skill industries are accessible via transit within 90 minutes for the typical metropolitan commuter, compared to one-third of jobs in high-skill industries.

These trends have three broad implications for leaders at the local, regional, state, and national levels, Puentes says. “As states are really struggling with their budgetary problems, both this year and into next, some places may think that transit systems are easy targets for budget slashing,” Puentes says. “But, really what we want to show in this report is that this is the wrong time to be doing that. We’ve got to maintain the lifeline that these transit systems provide.”

Read more about the study or watch the video of Puente’s interview below.