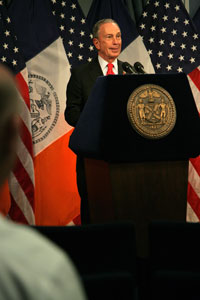 As New York residents crowded Ground Zero to celebrate President Obama’s statement that al Qaeda leader Osama bin Laden had been killed by U.S. troops, Mayor Michael Bloomberg released a statement calling bin Laden’s death “a critically important victory.” Bloomberg said he hopes the news will bring closure to the families of those who died in the Sept. 11 terrorist attacks on the city, saying, “New Yorkers have waited nearly 10 years for this news.”

Obama released the news about bin Laden’s death late Sunday night, saying that a small team of soldiers found the terrorist leader in a highly secure compound in Abbottabad, Pakistan, about 31 miles north of the Pakistani capital of Islamabad. “Tonight, I can report to the American people and to the world that the United States has conducted an operation that killed Osama bin Laden, the leader of al Qaeda, and a terrorist who’s responsible for the murder of thousands of innocent men, women and children,” Obama said in the statement.

Bloomberg said bin Laden’s death was the fulfillment of a promise Americans had made after the Sept. 11 attacks to stop at nothing to capture or kill Osama bin Laden. “After the contribution of millions, including so many who made the ultimate sacrifice for our nation, we have kept that word,” Bloomberg said in the statement. “The killing of Osama bin Laden does not lessen the suffering that New Yorkers and Americans experienced at his hands, but it is a critically important victory for our nation, and a tribute to the millions of men and women in our armed forces and elsewhere who have fought so hard for our nation.”