His property value is in the toilet

A Manson, Maine, resident has lined his property with toilets in protest of the city's decision to allow on-street parking on his road. 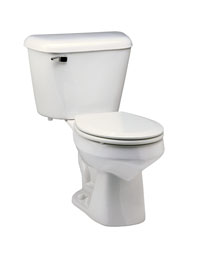 The 17 toilets lining the perimeter of Manson, Maine, resident David Linscott’s yard are not there to advertise his business as a plumbing contractor. They are Linscott’s way to protest the town’s decision to allow on-street parking in front of his house to accommodate expansions at a nearby middle school, according to Foster’s Daily Democrat newspaper.

Linscott began his potty protest in late fall in response to the city’s previous decision to expand a nearby middle school. Linscott claims the planning for the addition to the middle school did little for the consideration of off-street parking.

As a result, the road in front of the school was widened to allow for street parking, and that led to several problems, the prickled plumber says. People wander onto his yard, and areas of his property flood as a result of the changes to the road.