Maybe he should have brought a shovel

If you see nothing wrong with bringing a pitchfork to a government meeting, then there's a man — and a judge — in Arizona who agree with you. 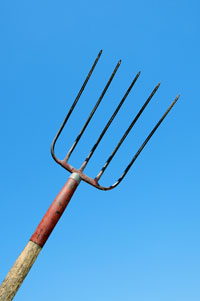 If you see nothing wrong with bringing a pitchfork to a government meeting, then there’s a man — and a judge — in Arizona who agree with you. On Feb. 16, 2010, Mervin Fried tried to bring the farm tool into a Mohave County Commission meeting, and when County Manager Ron Walker told Fried to leave his pitchfork outside, he refused, according to the Associated Press (AP). Fried was arrested when he tried to enter the building anyway, but on March 5, Arizona Judge Pro-tempore Paul Julien ruled that Fried was not guilty of the charge of third-degree trespassing.

The judge said officials have the authority to restrict access to the building. But, because members of the public with holstered handguns are allowed inside, he ruled that denying access to the defendant because he had a “holstered” pitchfork was arbitrary, capricious and unreasonable, according to AP.