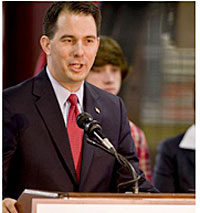 Wisconsin Gov. Scott Walker (pictured) has signed a law that strips public employees of most collective bargaining rights. The full state assembly passed the law one day after Republicans in the Wisconsin Senate used a procedural method to bypass the Democrats’ efforts to avoid a vote.

Walker signed the Budget Repair Bill on Friday, and said in a statement that the passage of the bill saved 1,500 state jobs. “The state will now be able to realize $30 million in savings to balance the budget and allow 1,500 state employees to keep their jobs,” Walker said in a statement. “The reforms contained in this legislation, which require modest health care and pension contributions from all public employees, will help put Wisconsin on a path to fiscal sustainability.”

The state’s Senate passed the bill Wednesday after weeks of protests. Democrats in the Senate had been in hiding, refusing to come to the capital in an effort to prevent a quorum from being formed, essentially blocking a vote. However, Senate Republicans removed financial provisions from the bill, which permitted a vote to be held without a quorum. “The Senate Democrats have had three weeks to debate this bill and were offered repeated opportunities to come home, which they refused,” Walker said in a previous statement. “In order to move the state forward, I applaud the legislature’s action today to stand up to the status quo and take a step in the right direction to balance the budget and reform government.” The full assembly passed the bill on Thursday.

However, Senate Democrats almost immediately said they plan to challenge the ruling, according to the Capital Times newspaper in Madison, Wis. “I honestly do not believe this action will stand. We will seek every recourse available,” state Assembly Minority Leader Peter Barca told the Times. “Clearly what they did was improper and illegal.”

Read Walker’s statement on the Senate vote and on the passage of the bill, or the Capital Times article.