The argument by some that state and local government workers are more privileged than their private-sector peers is false, according to a new report from the Economic Policy Institute.

The argument by some that state and local government workers are more privileged than their private-sector peers or have somehow been cushioned from the effects of the recent recession and slow recovery is false, according to a new report from the Washington-based Economic Policy Institute (EPI). In Wisconsin, where protests over Gov. Scott Walker’s proposal to limit state employees’ collective bargaining capabilities have made the state a focal point in the debate about government worker privileges, public workers already make less than their private-sector peers, the EPI report claims. 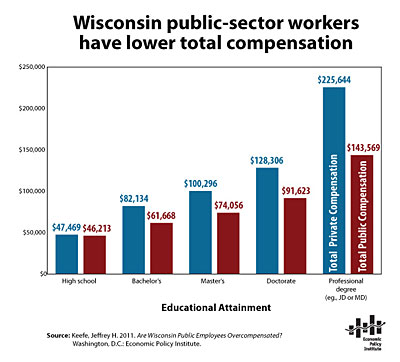 EPI’s “Snapshot” report by policy analyst Ethan Pollack states that, when comparing the total compensation (including non-wage benefits such as health care and pensions) of workers with similar education, private-sector employees make more than public-sector workers. “Workers with a bachelor’s degree or more — which constitute nearly 60 percent of the state and local workforce in Wisconsin — are compensated between $20,000 less (if they just have a bachelor’s degree) to over $82,000 a year less (if they have a professional degree, such as in law or medicine),” the report states.

When controlling for a larger range of earnings predictors than just education, such as age, experience, gender or race, Wisconsin public employees face an annual compensation penalty of 11 percent, according to EPI’s Snapshot. Adjusting for the slightly fewer hours worked per week on average, public workers make about 5 percent less than they would in the private sector. “The deficit that Wisconsin faces is caused by the current economic downturn and the recent tax cut package. It has nothing to do with the compensation of the people that educate our children, keep the streets safe and clean, keep dangerous chemicals out of our water, and keep insurance companies from taking advantage of us,” Pollack writes in the report. “Instead of opportunistically using these hard times to target workers who, because of their public service, already take a substantial pay cut, Wisconsin politicians should focus on creating jobs and boosting the incomes of all workers.”