New York is the latest of about 40 police departments around the U.S. that are putting the bass-thumping Rumbler siren in its fleet of cruisers. The siren gets the attention of distracted drivers on cell phones and is designed to grab motorists' attention.

New York is the latest of about 40 police departments around the U.S. that are putting the bass-thumping Rumbler siren in its fleet of cruisers. The siren gets the attention of distracted drivers on cell phones and is designed to grab motorists’ attention. Listen to it here or here or here. A few Rumbler videos are here.

The system emits woofer-driven sound waves that drivers and pedestrians can feel. The vibrations are accompanied by a low whooping sound. The woofer is the loudspeaker driver designed to produce low frequency sounds. The system is effective in dense urban environments with heavy vehicle traffic.

Rumblers were installed in about 150 NYPD fleet vehicles as part of a pilot program in 2009. This summer, fleet crews will install the sirens in about 500 cruisers. Eventually about 5,000 vehicles in the NYPD vehicle fleet will be equipped with them. The agency buys about 1,300 new cars for its fleet each year.

The Rumbler system senses the primary siren tone signal and reduces the signals’ frequency by 75 percent. It then amplifies the sound through a pair of high-output woofers. The system’s timer allows the tone to sound for eight seconds, providing effective warning at hazardous intersections, and then automatically shuts off. 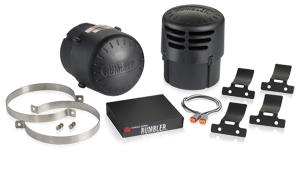 A Rumbler intersection-clearing system consists of an amplifier, with built-in timer and two subwoofers. Fleet managers order vehicle-specific mounting hardware separately. The system can be paired with most 100/200-watt emergency siren amplifiers.

Pasadena, Calif.’s police DWI Task Force is retrofitting task force vehicles with the Rumbler, and new ones will come equipped with it, according to Pasadena police Lt. John Dombrowa, who oversees the Pasadena Police Department’s vehicle fleet.

Dombrowa says his department is putting the system on his unit’s DWI fleet after observing other law enforcement agencies trying it. “We’re hoping it works better,” he says. “You have refusals to stop because they’re unaware you’re behind them. DWI departments are almost always working in the dark.”

The Rumbler clears intersections of vehicles and pedestrians, and has applications in rescue vehicles and ambulances.

A data sheet outlines a few Rumbler product enhancements, including: