New York has passed a moratorium on hydraulic fracturing — the practice by natural gas producers of flooding underground gas deposits with fluids to force the gas up — and other states are regulating the process. 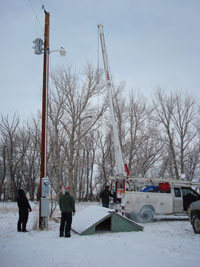 On Nov. 30, the New York State Assembly voted in favor of a moratorium on hydraulic fracturing, or “fracking,” the practice by natural gas producers of flooding underground gas deposits with chemical-containing fluids to force the gas up. If Gov. David Paterson signs the moratorium, as he is expected to do, New York will be the first state to take such a step against the process. However, several other states have been tightening regulations on fracking in an effort to stem drinking water contamination that is costing local governments.

The New York moratorium, if signed, would last until May 15, 2011, and was passed out of concern for the potential environmental and health effects of chemicals contained in the hydraulic fracturing fluid, according to Assembly Speaker Sheldon Silver. “This moratorium will help ensure that the hydrofracking process will only be allowed in New York after a thorough, deliberate and unrushed analysis of the process is complete,” Silver said in a statement. “By preventing the state from issuing new permits to oil and gas companies until further review, we have protected our water supply and served notice to the industry that the health and safety of New Yorkers is our top priority.”

Other states are slowly ramping up their own fracking rules — including Colorado, which amended its regulations in late 2008, and Pennsylvania, which is exploring new enforcements. Fracking is suspected of polluting groundwater in Wyoming, Texas and other states as well, according to the Sheridan, Wyo.-based Powder River Basin Resource Council conservation group.

In September, the U.S. Environmental Protection Agency (EPA) warned some residents of Pavillion, Wyo., a town of 166 residents, not to drink from private water wells after tests found potential groundwater contaminants that may have come from fracking operations. EPA found low levels of petroleum compounds, including the carcinogen benzene, in 17 of 19 drinking water wells sampled. Sample results also found high levels of the contaminants in nearby shallow groundwater. EPA officials say they are uncertain about the potential for the contaminated shallow groundwater to migrate to the town’s drinking water supply. “EPA has not made any conclusions about the sources of chemical compounds found in drinking water wells,” the agency said in a statement in September.

Fremont County, Wyo., where Pavillion is located, is preparing to conduct a feasibility study with the state on how to treat the contaminated wells, says County Commissioner Dennis Christensen. State and county officials plan to begin selecting an engineering firm for the treatment project in December. They have yet to determine who will pay for it and how much it will cost, he says. Until then, residents cannot drink from the affected wells, so the EPA, along with state and local governments and EnCana, the primary gas producer in the area, have been working to make sure the affected residents receive access to alternate water sources in the meantime.

In August, Wyoming instated new rules requiring natural gas drillers to disclose chemicals used in fracking. However, some critics say the rules still are not tough enough. “[Wyoming’s is] the toughest disclosure rule on the books, but the devil’s in the details,” said Deb Thomas, an organizer with the Powder River Basin Resource Council, in a September statement on Wyoming’s rules. “We still need legislation to protect citizens in every natural gas drilling state and prevent drilling companies from trying to keep chemicals used in oil and gas drilling, fracking and production secret.”

Natural gas production — along with the revenues the county receives from it — has dipped a bit because of rising exploration costs, but Christensen has not received complaints from drillers about fracking regulations hampering their work, he says. “We want to recover the energy America needs,” he says. “But we want to do it on our terms and in a way that’s environmentally safe. And that, at the least, means looking at the chemicals that are being put into the ground.”