NLC elects president and board of directors 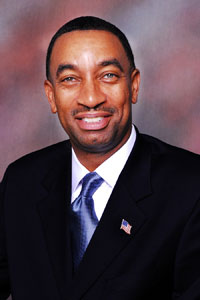 In his acceptance speech, Mitchell said he would be announcing new initiatives to built upon work NLC is doing in five key areas: sustainability, immigration, small business development, transportation and infrastructure improvement, and economic development with a focus on creating jobs. “We must also find ways to get more members involved. NLC’s programming, advocacy and services will only improve by having more members participating in NLC activities,” Mitchell said.