Municipal Leader of the Year: Working on a dream

Municipal Leader of the Year Mayor Buddy Dyer is marshaling the forces to transform Orlando, Fla., into more than a tourist destination. 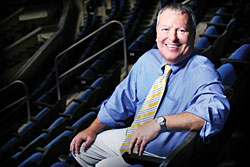 When Orlando, Fla., Mayor Buddy Dyer was still at the University of Florida law school, he was chosen as head of the law review and immediately faced a problem: it was years behind schedule. Yet, by the time he completed his term as editor, the publication was back on track.

Later, when the student association was locked in a bitter dispute and the opposing sides barely spoke to each other, “the only thing anyone could agree on was that Buddy Dyer was the right person to mediate the dispute,” recalls Mayanne Downs, Dyer’s law school classmate and current Orlando city attorney.

Since 2003, Orlando voters have considered Dyer the right person to lead the Central Florida city, and he has delivered with impressive results, from the building of major arenas and development clusters to the groundbreaking of long-sought commuter and high-speed railways. And, the same ability to focus on results and bring opposing sides together is cited as the signature of his success. “He’s the real deal,” says Jacob Stuart, president of the Central Florida Partnership, a local business-civic advocacy group. “He’s praised because he deserves it.”

As recognition of his performance since his election in 2003 and his significant achievements in the past year, American City & County has chosen John Hugh “Buddy” Dyer Jr. as the 2010 Municipal Leader of the Year.

The list of Orlando’s recent accomplishments under Dyer’s leadership is impressive and encompassing:

“He’s a great champion of economic development in Orlando,” adds Alex Martins, president of the Orlando Magic. “The mayor’s vision is to improve the quality of life of our citizens.”

In reflecting on the qualities that have led to Dyer’s success, civic leaders and friends point to “the Dyer method,” which is his ability to bring together diverse groups representing a variety of interests to forge coalitions that can produce results and build a team approach that points to the accomplishment of others. “He’s a consensus builder by nature,” says Noranne Downs, regional secretary for the Florida Department of Transportation, who has worked closely with Dyer. “He’s fair to everybody.”

Many refer to the development of the SunRail project as a prime example of how Dyer’s vision and coalition building overcame obstacles to push through a project with critical regional significance that had been stymied for a quarter-century by partisan and geographic differences. The $1.2 billion project will run north to south along a 61.5 mile route through downtown Orlando and is scheduled to open in 2013.

Because of his commitment to the project, Dyer became the chair of the Central Florida Commuter Rail Commission and engaged area county governments, businesses and civic organizations in a collaborative, regional approach with the city. Over three years of meetings, the region united behind the project and a secure local funding source, but the state legislature balked in 2008 and again in 2009.

In a fortuitous turn of events, the federal government was pushing high-speed rail as part of its economic stimulus program and saw the Orlando-Tampa corridor as a “jumping off point” for an eventual nationwide high-speed rail network. The impetus from the federal project helped push SunRail though the state legislature during a special session. High Speed Rail is scheduled to open in 2015.

“This was a three-year journey,” Stuart says. “No one was in charge. It had the support of cities down the route but not from areas where it didn’t run. Mayor Dyer understood that you don’t have to live on the rail line to feel the impact. He was able to help the area stay focused and move forward.”

Noranne Downs, with the state DOT, says the mayor worked hard to keep the project as a regional priority. “Mayor Dyer called anybody and everybody to make it happen,” she says. “It took extraordinary effort and leadership.”

She also was impressed that Dyer was able to stay focused despite the setbacks at the state level, which could easily have derailed the project. “He would say, ‘We’re not going to get negative. We have to stay positive and keep going,'” she recalls. “He was able to convince the other leaders that they came close to success by sticking together and that they would succeed by sticking together.”

Another achievement cited by the mayor’s boosters is his ability to promote a vision of Orlando that includes a revitalized downtown and an economy that is diversified beyond its traditional role as a tourist destination. Several recent initiatives have brought the city of 250,000 residents closer to fulfilling that promise. 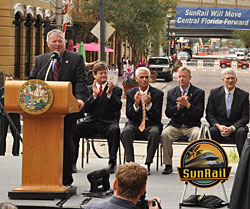 The just-opened $380 million Amway Center is the centerpiece for a collective $1 billion “Community Venues” project that is the largest public works project in Central Florida history. In addition to the basketball and events area, the project is slated to place a new performing arts center and a refurbished Citrus Bowl in the middle of downtown. The Amway Center construction awarded about one-third of its contracts to local minority and women-owned businesses at a time when the area was hit by the national recession. “This was a great collaboration and community partnership,” Martins says. “Mayor Dyer has placed a lot of focus on the revitalization of downtown. He understands that to be a great city, you have to have a vibrant downtown.”

Another of Dyer’s major goals has been to diversify the economy beyond tourism by emphasizing new facilities for medical research and encouraging additional investments by digital media companies. Last year, the Sanford Burnham Medical Research Institute joined the University of Central Florida Medical School to form Medical City. The area is home to a variety of medical research companies, universities and clinical treatment facilities, including the Nemours Children’s Hospital, Orlando Veterans Affairs hospital and University of Florida Research Center.

“Medical City is an exciting transformation, global in nature,” Stuart says. “It’s a diversification of the economy and an effort to attract the creative class. It is not something that would happen without Mayor Dyer and without a coalition.”

Dyer also is using the clustering approach in the development of Creative Village as a center for a “live, work, play” neighborhood dedicated to the digital media industry. The area already serves as the headquarters for the University of Central Florida’s School of Emerging Media and the House of Moves, a motion capture studio.

Stuart and others believe that Dyer’s special qualities as mayor were honed through his previous 10 years in the state Senate, including a stint as minority leader. “He had a very successful run in the state Senate,” recalls Mayanne Downs, his longtime friend and colleague. “He did a lot for his constituents and was widely respected.”

Dyer gave up his seat to run for state attorney general, losing to Charlie Crist, who went on to become governor. Though Downs says that Dyer was very disappointed, opportunity came his way when Orlando’s incumbent mayor took a new state position. After a contentious election, Dyer won the seat, and a year later, was re-elected with a platform of recreating the downtown.

Many attribute Dyer’s success to his unusual combination of skills. Born in Central Florida, he graduated from Brown University with a degree in civil engineering before earning his law degree from the University of Florida.

Now 52, Dyer believes that both professional degrees trained him to structure a project and develop a logical path to completing it. He also attributes his management style to lessons learned during his years in the state Senate. “You get things done by building consensus,” he says, noting that politics has since become more partisan. “I was the Democratic leader, but very few things are passed on a partisan basis. I think that experience has been really helpful on a personal level.”

He came into the mayor’s office without any local government experience and learned on the job. He found that the same philosophy that worked in the highly political statehouse in Tallahassee could be applied in Orlando City Hall, which is nonpartisan. “You set a vision and follow a path,” he says. “There are always obstacles to overcome that you don’t foresee. You try to plan for impediments and take care of them and resolve them as they come along.”

The primary goal from the first day of his administration has been convincing the Central Florida region that it needed a “great downtown” in Orlando. “I was building off the foundation that the former administration laid here,” he recalls. “It was talked about and wished for for a long time. I tried to build a consensus to make it happen.”

Part of his plan, he says, was to “change the mindset” of the Orlando community, so that people have begun to believe that the community ranks among the world’s best cities. “Orlando has its brand established on one area: tourism,” he says. “I don’t think everyone understands what else Orlando is. We’re trying to create the type of place where kids growing up in Orlando will not want to move away, but want to stay and work here.”

Though he is a Democrat, and the political environment today has shifted very strongly to the right, Dyer says that he has been able to gain the support of Republicans and the business community behind his major capital initiatives by couching his program in terms of economic development. “We want to continue to think big,” he says. “Orlando isn’t competing with Tampa, but it’s Central Florida against Amsterdam and Stockholm.”

While pursuing significant capital improvements, he also has focused on improving public safety in the city. He cites proudly the city’s ability to increase the number of police and fire personnel on the streets and reduce crime by record numbers. To achieve those goals, he organized a bipartisan group of congressional leaders from around Florida to help secure federal funding that ensured no public safety position cuts were necessary in Orlando. Since 2008, the number of homicides has fallen by 46.2 percent and total crime by 35.4 percent, according to city statistics.

As for his future, Dyer notes that there is no term limit for mayor in Orlando, and he intends to run for re-election in 2012. “I don’t want to leave work undone,” he says. “I want to see these projects from beginning to end.”

Dyer’s friend, Mayanne Downs, sees a bright future for Dyer if he decides to pursue higher office, perhaps after his sons are a few years older. “Wherever he goes, I can absolutely promise that he will put the ‘Dyer method’ in place,” she says. “He’ll sit everybody down, set the project goals, and what he says will get done, will get done. You can bet on it, absolutely bet on it.”