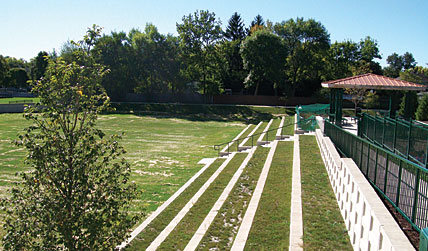 In response to a damaging 2006 storm that produced severe flooding throughout the city, Downers Grove, Ill., commissioned and adopted a comprehensive Watershed Infrastructure Improvement Plan. The plan identified high-risk areas for drainage and flooding, and recommended specific solutions for each problem area. Sixteen high-priority areas were identified, where flooding would result in immediate danger to public health and safety, or complete loss of property value, structural damage and significant basement flooding. The plan recommended that the 16 projects be completed within three years.

The major challenge to meet the goals of the plan was locating enough open space within the community for detaining stormwater, while keeping the total cost of all the projects within the budget of a $25 million bond issuance, says Public Works Director Naneil Newlon. “To meet this challenge, Downers Grove and the Downers Grove Park District became partners through an intergovernmental agreement, where the park district provided property and the village acted as the lead agency, providing the funding for stormwater as well as park improvements.”

As a result of the partnership, Downers Grove’s Washington Park became the first major stormwater improvement project under the new plan, providing the area with significant flood relief while creating a renovated park to become the focal point of the neighborhood. New stormwater basins installed at Washington Park will detain a substantial amount of runoff from the upstream area in very intense but infrequent rains and significantly reduce flooding in the area, Newlon says. The renovated park includes two soccer fields, a softball field, terraced and bleacher seating, a plaza with fountain, two playgrounds, ornamental fences, a gazebo and a horseshoe pit. As a result of sharing land with the park district, the village estimates a savings of $5 million.

“This project is very important to the community because it provides critical stormwater detention, creates community gathering and active recreation amenities, and saves significant cost by creating a partnership of the two land uses,” Newlon says.