Residents and local leaders like the idea of creating sustainable communities, but two new studies show that progress in attaining sustainability goals is slow. First, sustainability comes in several forms, from energy efficiency to recycling, and each community must choose which areas to address first. Second, the economy is not helping, leaving those who want to increase sustainability programs to fight for funding. Cities and counties, however, are making progress toward reducing energy use and emissions by drawing on ingenuity and public interest to make investments toward their long-term goals. 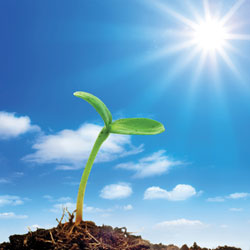 According to a recent study by the Washington-based International City/County Management Association (ICMA), 70 percent of the more than 2,000 participating local governments ranked energy conservation as a priority or a high priority, and 62 percent said they consider the environment to be a priority or a high priority. However, only a fraction of those respondents actually have taken specific steps to tackle sustainability issues, such as:

Reasons for the holdup

Why have local governments, in general, been slow to adopt sustainability programs? The enormity of the issue and the lagging national economy are two main reasons, authors of the ICMA study say. “City and county governments are slow to act in part because this is a complex, multi-faceted area, and it’s still fairly new,” says Jim Svara, director of Arizona State University’s Center for Urban Innovation, a partner in the ICMA study.

“Governments have been slow to act probably because they, their residents and businesses are so concerned about the economy and jobs,” adds Evelina Moulder, director of survey research for ICMA. “By far, the survey revealed that the highest priority for local governments is the economy. The next highest were energy conservation and the environment. You can absolutely make the argument that if [a local government] makes the initial investment [in a sustainability program], there is going to be a financial payoff later. But while you’re having financial challenges, it can be difficult to argue for that kind of investment.”

A similar sustainability survey conducted by the Washington-based National Association of Counties (NACo) in September confirms that economic concerns are closely linked to local governments’ sustainability efforts. “In areas where the environmental issues have matched up with the economy, governments are not slow to act,” says Jared Lang, program manager for NACo’s Green Government Initiative. “People are starting to realize there are so many things we can pursue that are environmentally beneficial and also economically beneficial, but governments are less inclined to initiate programs when they can’t figure out the economic benefits.”

Even if local governments are responding slowly to the challenges of sustainability, many of them are acting in some capacity, and some are well ahead of the curve, Moulder says. Located in progressive Silicon Valley, Palo Alto, Calif., has been a leader in sustainability initiatives for years. Some of the city’s top priorities focus on climate change initiatives, energy conservation, water quality and conservation, and waste reduction through recycling and reuse.

In the past few years, Palo Alto has been successful in reducing its greenhouse gases, lowering them 10 percent between 2005 and 2009. Its latest goal aims to reduce greenhouse gases from city operations by 20 percent and reduce community emissions by 33 percent.

While Palo Alto residents widely support climate change and other environmental initiatives, economics are still a barrier. “We have strong support internally and externally, but with budget limitations from the city council,” says Pamela Antil, Palo Alto’s assistant city manager. “For example, our plans for additional purchases of renewable energy above the 33 percent have been curtailed by the Utilities Advisory Commission because of the costs. Brown energy costs $60 per megawatt hour, while renewable energy costs about $105. The residents are more bullish about the city being more aggressive on sustainability than the council, because [the council] is more cost conscious.”

Although renewable energy is costly, Palo Alto proves that making the switch is cost-effective in the long run. The city is purchasing more expensive renewable energy, but overall costs are lower because the city reduced its consumption of all types of energy — from its fleet, solid waste processing, paper purchases and electrical energy use. “We do a lot of these things because it is the right thing to do, not necessarily to save the city money,” Antil says. “But we do track all of that, and from 2005 to 2009, we have saved more than $600,000 in city energy consumption.”

Community education is an important part of Palo Alto’s sustainability program, and residents are widely responsive. The city’s sustainability staff provides “a tremendous amount of education and information through the city’s website, Facebook page and Twitter account,” Antil says, and it conducts at least 130 school programs annually.

After adopting a zero-waste initiative with a goal of sending no waste to the local landfill by 2021, Palo Alto residents and businesses have diverted 74 percent of waste from the landfill. Antil attributes the success to a robust community education program and residents who are interested in and passionate about environmental issues. “Our community is not shy,” Antil says. “When they have great ideas, they share them.”

Some recently implemented ideas that came from residents include last year’s plastic bag ban and 2010’s polystyrene ordinance, which bans the use of Styrofoam in restaurants and foodservice establishments. The ordinances have helped divert more waste from the landfill.

Palo Alto residents continue to encourage the government to take new actions toward a more sustainable city. “Our community really wants to expand our curbside recycling program to include a curbside composting program for food scraps,” Antil says. “So we’re looking into it.”

Boulder, Colo., has long been involved in environmental initiatives; as early as the 1950s, the city established an open space preservation program. This decade, Boulder voters were the first in the country to approve a local carbon tax, funding a range of programs to reduce the city’s local greenhouse gas emissions. The tax generates more than $1 million a year to support energy efficiency and other programs that have helped lower greenhouse gas emissions, says David Driskell, Boulder’s executive director of community planning and sustainability.

Today, Boulder continues its tradition of commitment to sustainability. Because energy use in buildings is the most significant component of the city’s greenhouse gas inventory, its new “SmartRegs” program is a top priority. The program establishes energy efficiency requirements in rental properties, which accounts for half of the city’s housing, and all properties must comply by 2018.

Another new energy efficiency program is being rolled out for homeowners and commercial property owners, which will provide an “energy concierge” service to prioritize building improvements and deliver custom financing packages that allow the city to loan money to property owners for solar energy systems or energy efficiency retrofits, and owners can pay back the loans through property tax bills over 20 years, Driskell says. The programs are possible through grant money and voter-approved bonding. “By improving efficiency, we reduce demand for coal-fired electricity, lower utility bills, keep more money within the community, and create jobs during the program implementation period,” Driskell says.

In addition, Boulder has implemented a community-wide planning process “to explore options for the city’s energy future and define the path to an energy supply that is cleaner, reliable and affordable over time,” Driskell says. “We want to position ourselves to be a center for the new energy economy.”

Will County, Ill., manages its waste

One of the fastest growing counties in Illinois, Will County has focused on developing a sustainable solid waste program for many years. In 1988, the county formed its Waste Services Division, which gives grants to various entities to establish recycling and other programs, says Dean Olson, manager of the division. In addition to operating curbside recycling programs, Will County has established programs to recycle electronic waste, medications, books and textiles, and it holds events to collect used tires and hazardous waste.

“The main [reasons] we collect these materials are to recycle or reuse them, or to keep them from polluting our environment and taking up valuable space in the county’s landfill,” Olson says. “We offer these collection opportunities to our residents, but we also have an agreement with the Illinois Environmental Protection Agency to provide enforcement of environmental laws for open dumps, open burning, landfills, compost sites, land application sites and transfer stations throughout the county.”

This year, Will County is taking its commitment to the environment even further, with the help of a $3 million grant from the U.S. Department of Energy’s (DOE) Energy Efficiency & Conservation Block Grant. With $1 million of the grant funds and a $6.2 million investment from Houston-based Waste Management, Will County recently broke ground at an existing landfill for a gas-to-energy facility that will convert landfill gas into electricity. Scheduled to be operational by summer 2011, the facility initially will produce 4.8 megawatts (MW) per year, enough electricity to power 3,800 homes, and it eventually will produce 12.8 MW, enough energy to power 8,000 homes. The new facility also will bring the county significant revenue, beginning with more than $440,000 the first year and eventually growing to an estimated $1 million.

In addition to the gas-to-energy facility, Will County is using the DOE grant to install energy-efficient components at county facilities, such as a green roof, motion sensors for lights, high efficiency toilets, LED lighting, newer heating and air conditioning components and energy-efficient boilers. The county also will use the DOE funds to install a cool roof at the Court Annex building, replace windows at various buildings, modernize an elevator and replace revolving doors at the county’s nursing home, Olson says.

Progress may be slow among local governments, but it is happening. As more communities like Palo Alto, Boulder and Will County pave the way, other governments will follow, leaders say. “I feel confident that we’ll see more initiatives in place the next time we do a follow-up study,” says Moulder, noting that DOE grants are helping local governments take greater steps forward.