Survey: Nearly two-thirds of U.S. travelers will use high-speed rail

Nearly two-thirds of adults (62 percent) said they would definitely or probably use high-speed rail service if it were an option, according to a survey from the American Public Transportation Association. 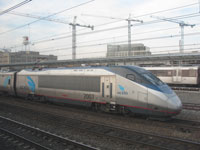 Nearly two-thirds of adults (62 percent) said they would definitely or probably use high-speed rail service for leisure or business travel if it were an option, according to a survey from the Washington-based American Public Transportation Association (APTA) released Oct. 28.

The survey, taken among 24,711 adults, also asked how important various factors would be in choosing high-speed rail service. Ninety-one percent of respondents said high-speed rail should offer shorter travel times compared to driving to their destinations; 91 percent said the rail service should be less expensive than flying; 89 percent said it should be less expensive than driving; and 85 percent said the rail service should integrate with local public transit so they could avoid using rental cars and cabs, and paying parking fees.

The survey respondents ranked the following other factors as important in choosing high-speed rail as a mode of travel:

APTA wants Congress to invest $50 billion over the next six years in high-speed rail. The association says the investment during that time frame, along with $123 billion in public transportation investment from the federal transportation bill now under consideration in Congress, will help support and create 6.2 million jobs. “In most political circles, garnering nearly two-thirds support for a forward-thinking vision like high-speed rail would be considered a landslide,” said APTA President William Millar in a statement. “We strongly support the government’s commitment to implementing high-speed rail. It will provide more options for travelers, as well as create jobs and be a strong boost for the local economy.”

Read more of the results from APTA’s survey.