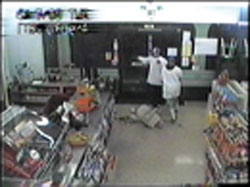 The system was put to work immediately when video surveillance caught a suspect robbing a Las Vegas convenience store. The team used the video forensics system to isolate the video it wanted from other video feeds, enhancing it to produce clearer still images. A detective showed residents the images of the suspect, who quickly was identified. When the suspect saw the images, he confessed to the robbery and was arrested. Criminalist Photo Supervisor David Phillips says the new system cleaned up the video and created a still with enough detail to make a positive identification.

“What you see on TV is not possible. Technology can’t clarify details that were not recorded in the first place. The systems are designed to see, for example, a woman slip, but not the grape she slipped over,” Tufteland says.